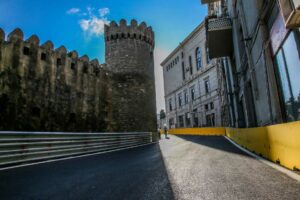 The toughest challenge on the circuit at the Azerbaijan Grand Prix has had some tweaks made to it – in the narrow castle section at Turn 8.

While Lewis Hamilton and Max Verstappen have both said recently that they no longer go on track walks during a race week, they will have missed a key adjustment made to the difficult left-hander.

The raised inside kerb has been removed from the inside of the corner, leaving a flatter entry and a re-profiling of the asphalt should make for a smoother surface beneath the drivers.

However, a concrete wall remains in place to deter drivers from trying to take too much speed into one of the narrowest sections of any track on the Formula 1 calendar.

As a result, it was predicted by Sky Sports pundit Anthony Davidson that drivers will be able to add as much as 10mph more speed into corner entry, but the tight exit will still represent a significant challenge behind the wheel.

Davidson described the changes on The F1 Show on Sky Sports: “The old kerb has gone, it’s going to be flat all the way up to the [inside] barrier, which is solid concrete – you don’t want to be hitting this stuff.

“You can carry much more speed through here… so that means you have to get your braking point done and nailed even sharper than it was before.

“Things will now be faster all the way up that hill [after Turn 8].”

Things we're excited about for the next race:

Seeing drivers try and squeeze their way through this living hell of a corner again #f1 pic.twitter.com/TEfnhAWSFz

Several have been caught out in that area of the track before, with Robert Kubica clipping the inside wall and ending up in the barrier, as well as Charles Leclerc cursing himself on team radio after locking up and crashing.

AlphaTauri’s Pierre Gasly doesn’t seem enamoured with the decision, however. He told The F1 Show: “I like the very tight castle part and unfortunately they took out that kerb, which made it quite exciting because you were playing with really fine limits over there.

“That’s going to be the same for everyone but it’s still quite intense. Obviously the straight is very long [in Baku], but the rest of the track is quite technical.

“I was surprised [by the changes]. I discovered it this morning, I practiced it in the sim for the whole day last Friday with the kerb and now it’s not there anymore.

“I don’t really know why they did it, it’s going to make the corner a lot faster. It was very, very tricky before – every time you would come into that corner, you would get an adrenaline rush because, as you jump over that kerb, you never really knew how the car would behave.

“I now think it’s going to be a lot more predictable, but it’s still a difficult track.”