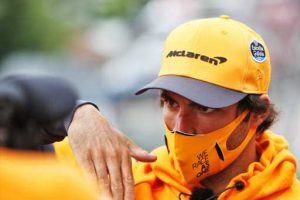 2020 may be a disappointing season for Ferrari, but Carlos Sainz doesn’t regret his decision to join the team next year.

The Spaniard will end his two-year association with McLaren once the 2020 season concludes and make the move to Italy to partner Charles Leclerc at Ferrari.

Sainz signed on the dotted line before the 2020 season had begun, going off the knowledge that the team had won two races and scored seven pole positions in the previous year.

But Ferrari’s fortunes have taken a sharp turn for the worse this time around, and at the Belgian Grand Prix both Leclerc and Sebastian Vettel missed out on the points through pace alone.

The team sit P5 in the Constructors’ Championship whilst McLaren are currently in P3, so Sainz could be forgiven for regretting his decision.

However, that is far from the case.

“I’m very comfortable with the decision I’ve taken,” he told reporters ahead of the Italian Grand Prix.

“I’ve got 100% confidence in Ferrari’s people in what they can do for the future. Let’s just remember that last year they were capable of doing seven pole positions, so it’s a team that I think knows how to produce very good cars.

“And regarding whether I’m nervous, what makes me nervous is to lose 30 points due to no fault of my own; that’s what really concerns me right now and what really makes me go to bed and think, ‘Where the hell have I lost this amount of points and how is this happening to me?’. But no, I’m fully confident, I’m ready to go for Ferrari next season and I cannot be more excited.”

Walking the home of the #ItalianGP – Monza 🇮🇹#essereFerrari 🔴 #Seb5 pic.twitter.com/Iddxj6X4AN

Monza, home of the Italian Grand Prix, is famous for Ferrari’s notoriously demanding fans, the tifosi.

And although the grandstands will be empty this year, Sainz said his reception from the Italian fans as he visits the country for the first time since signing with Ferrari, only makes him more excited for what lies ahead in 2021 and beyond.

“I can already feel the excitement of the tifosi,” he explained.

“The way they’ve approached me whenever we leave the hotel, in between the hotel and the car – which is not that long time – but somehow, the tifosi manage to find you and to give you some good energy, and that good energy that I’ve received this weekend is already starting to make me feel how exciting it’s going to be next year being part of such a team, with such a history.