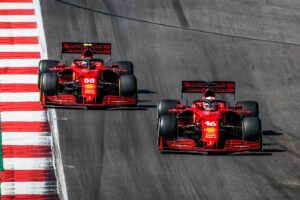 Carlos Sainz says he and Charles Leclerc are collaborating well at Ferrari – and working to push forward rather than focus on in-fighting.

The two drivers have been closely matched so far this season at the Scuderia, with Ferrari newbie Sainz only two points behind the Monegasque after nine races of the season.

The team are still lagging behind McLaren in the race for P3 in the Constructors’ Championship at the moment and after lingering tyre issues from previous races, Sainz is pleased with the progress the drivers are making together.

“We are working together as a team and pushing as hard as we can to move the team forward,” said Sainz, quoted by nl.motorsport.com.

“There will be races where Charles is clearly better and other races where I have to pass him, like I did at Portimao. That’s logical.

“But it is important we both show a strong race pace, that we work well together, that we get stronger and stronger in the race. In the last two or three races we have executed good strategies, we have managed the races and tyres well.

“We are ready to keep working in the same way because the atmosphere in the team is good. We just want to keep improving and wait for circuits where we will be stronger.”

Can you believe that this was over 6 months ago?!

Time flies when you’re having fun and it’s been a lot of fun having you with us, @CarlosSainz55 ❤️ #essereFerrari 🔴pic.twitter.com/DxD7wIvYpT

Having run deeper than anyone else into the race on hard tyres in Austria, Sainz was able to make up positions and take a well-earned P5 finish last time out on fresher rubber than his rivals.

With a stronger overall performance than expected in the recent triple-header, the Spaniard said the team can take heart from how they fared in France and Austria.

“The last stint [in Austria] was fun,” he said. “It always is when you are chasing and chasing. I managed to make some nice moves, also thanks to Charles who let me pass to attack [Daniel] Ricciardo.

“We managed to do that, which gave us some extra points. The speed was strong, but my confidence in the car was maybe not as good as in the first race.

“We had a bit of a problem with the balance and the temperatures, but overall it was a good double-header in Austria and a good triple-header for me. That gives me confidence for the last two races before the summer break.”