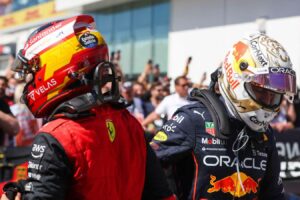 Carlos Sainz and Max Verstappen both agreed that the Spaniard and Ferrari had the stronger package in Montreal on Sunday.

Verstappen held off a 15-lap onslaught from a spirited Sainz in a gripping end to the Canadian Grand Prix, as the Ferrari driver chased an elusive first victory in Formula 1.

Sainz matched the World Championship leader and Red Bull driver through the majority of the race, closing up behind him on multiple occasions towards the end but finding himself unable to make a move for the lead.

Sainz acknowledged that he felt like the outright quickest driver on track for the first time this season, driving on the edge of the F1-75’s capabilities as he hassled Verstappen for the lead.

It ultimately did not pay off for the Ferrari man, but he felt pleased with how he drove nonetheless.

Some serious calmness under pressure to hold Sainz off for the final 15 laps. #F1 pic.twitter.com/nWK7XtD8Z8

“I’ve been the fastest guy on track, both in the medium and on the hard. I was catching Max in both occasions and I felt comfortable with the car.

“I was all over the place, close to [the] walls, you know, with confidence – ragging it, and I felt comfortable out there so it’s a pity not to have got the first win.”

Victory for Verstappen saw him extend his World Championship lead to 46 points after Sergio Perez’s early retirement, earning his fifth win in six races in the process.

The Dutchman took a comfortable pole position in wet conditions on Saturday and initially streaked away at the front on Sunday, before Sainz was able to match him in the closing stages.

Despite managing to keep his cool and hold off his former Toro Rosso team-mate, he feels the pendulum between who has the best outright performance swung in Ferrari’s favour this weekend.

“I think it did today. Yeah, absolutely,” Verstappen stated when asked about Sainz’s view that Ferrari had the quicker car. “So again, [a] few lessons to look at and why that is. I mean, the track was also very green, low grip.

“But you can see you know, one race, it looks like we have the upper hand and other races they look strong again. So we are very closely matched.”