Home » Racing » Carlos Sainz: I can be very close to Charles Leclerc

Carlos Sainz: I can be very close to Charles Leclerc 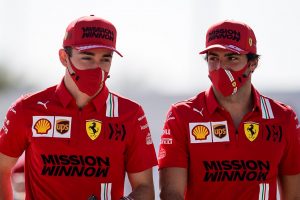 Carlos Sainz feels his battle with team-mate Charles Leclerc could be a “very close” one, but knows he needs to quickly adapt to his new car.

Sainz arrived at Ferrari to join up with Leclerc, who heads into his third season with the Scuderia, and with a reduced testing period to get used to his new car, many predict the Spaniard will be second to Leclerc.

But the former McLaren driver feels that, if he has a good opening weekend in Bahrain, he could really take the fight to his Monegasque team-mate.

On their battle, Sainz told Sky Italy: “I don’t know. Maybe I’ll go on track and I’ll find out that I feel great with the car and I can push as much as I want, and that I can be very close to Charles.

“Of course, now I’m in a new car, with only three days of experience, so for sure I’ve not completely learnt how the car works yet.”

While the intra-team contests are always interesting, both drivers have stressed since the end of last season that the success of the Ferrari team is what is most important.

After a difficult 2020 which saw the Scuderia drop to P6 – their worst season since 1980 – they will be desperate to show they are in a better position compared to last year, and Leclerc feels they are.

Asked whether they have improved, he said: “Of course. We feel the responsibility, we always have. When you work at Ferrari, you have to win. So, for sure, we want to show to have improved compared to last season, but we also have to be realistic.

“The last year has been really difficult, this year we think we have made some steps forward, but we will find out that on Saturday during the qualifying when all the cars will push as much as they can.

“For sure, we worked hard and we are motivated, then [it’s] about how much we have improved compared to the other teams, we don’t know yet.”