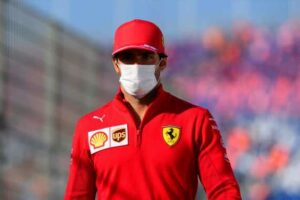 Ferrari’s Carlos Sainz was left extremely frustrated after limping his way through the Dutch Grand Prix with a lack of pace.

On the face of it, P7 at Zandvoort looked like a solid result for Sainz.

Coupled with P5 for his team-mate Charles Leclerc, Ferrari created an 11.5-point buffer over McLaren, stretching further ahead in P3 in the Constructors’ Championship.

However, Sainz said he had never felt slower than he did at the Dutch Grand Prix.

“I am very puzzled at the moment because I had no pace at all during the race since Lap 1,” he told Sky F1.

“Really I was struggling a lot with the front and tyres. I was degrading the tyres, it felt like I was sliding a lot and I couldn’t match the pace I had on Friday.

“This means we need to look into what went wrong because I have never felt so slow in a race, to be honest.

“I was struggling a lot and had no pace whatsoever.”

So, surely P7 on such a bad day is a strong result?

While Leclerc was able to convert his P5 grid slot into a P5 finish, he too was hoping for better – namely the P4 that went the way of AlphaTauri’s Pierre Gasly.

“I think today, the performance we were probably quicker than Pierre, and every time there was a bit of a gap I could come back,” Leclerc explained.

“Then once I arrived in the two-second range or two-and-a-half-second range it was very difficult to get closer.

“We were particularly good on the softs, especially towards the end of the race. We managed those tyres in a good way and then we went on the hards, was a little bit more difficult but we still had good pace, so the pace was good.

“But only fifth today – I think we could have done fourth.”

Leclerc felt all hope of P4 was lost for him at the start – from there, catching Gasly was always going to be “impossible” and he was reluctant to take risks with the McLaren battle in mind.

“No, it was impossible,” he told Sky Italia when asked if he could have caught Gasly.

“We tried to stay on the softs longer to have an advantage at the end of the race, but honestly we didn’t expect them to manage to make these mediums last so long.

“So we went with the hards, we tried but we didn’t make it. Maybe there was an opportunity at the start but I found myself a bit stuck and I didn’t want to take many risks.

“There were points to take today and we did that, especially against McLaren. So that’s the positive thing, then also we had a bit more pace than Pierre today but he was very tough to overtake.”

Next up is arguably the most important race of the season for Ferrari, that being their home race, the Italian Grand Prix.

Leclerc is not overly optimistic, telling Sky F1 he holds concerns over Ferrari’s performance down those long straights and so he will be hoping for a “very big surprise”.

“I’m really looking forward to it. It’s always very special for us, Ferrari to be in Monza,” said Leclerc.

“This year it will be quite difficult for us. I think the track is not fitting our car very well, but it’s especially in those moments that we need the support from the tifosi, so looking forward to being there.

“On a track as extreme as Monza, I think we know more or less where we will be and with those long straights I don’t expect to be so strong there.

“But hopefully we have a very big surprise and we win again in Italy…I don’t think so, but we will push for that.”