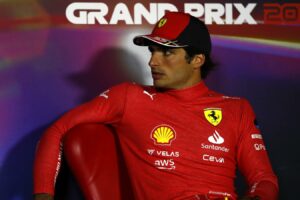 Carlos Sainz says he was “happier” with his progress driving the Ferrari F1-75 in Saudi Arabia, but still has some way to go.

Considering his strong performance in both qualifying and the race at the season-opening Bahrain Grand Prix, it was somewhat surprising to hear the Spaniard admit to “really struggling with this car to understand how to drive it”.

Sainz nevertheless started third on the grid in Sakhir and went one better in the race, albeit second position behind his Ferrari team-mate Charles Leclerc was essentially gifted to him by Max Verstappen’s late retirement.

‘Solid’ would be the best word to describe the 27-year-old’s display in Saudi Arabia a week later for although he held provisional pole position until the closing stages of qualifying, in the race he never looked like improving upon his starting place of third and that is duly where he finished.

But Sainz feels he is getting there in his bid to maximise his own achievements with this car.

“I was happier than in Bahrain, definitely,” Sainz told reporters after the race at the Jeddah Corniche Circuit. “There has been a bit of progress from my side of the garage with the feeling of the car.

“Having the opportunity to come back to this track, only 100 days after we were here with last year’s car, has given me a much clearer picture of the type of corner and the two or three corners I’m still lacking with this car.

“It’s quite clear for me now. It has given me a great opportunity to understand fully the magnitude of how much I need to adapt and how much I need to get the car a bit more to my liking, and I felt like we did a small step in the right direction.

“While I’m still not 100% with the car, to keep bringing the points and the podiums is important until I get back to 100% – then it will be time to join the guys at the top for the fight.”

Sainz now finds himself as a regular visitor to the podium having appeared there in each of the last three races this year and last – taking his number of F1 career top-three appearances to eight, with six of those since he joined Ferrari for the 2021 campaign.

From the 2020 Eifel Grand Prix with McLaren onwards, he has only twice finished out of the points in 31 races – and on both of those occasions finished 11th, in Portugal and France last year.