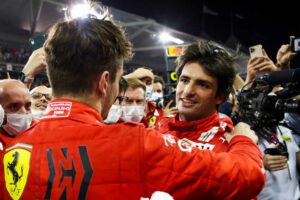 Carlos Sainz admits he had to learn a lot from Charles Leclerc to extract the most from his Ferrari this year after moving from McLaren.

Sainz has received widespread plaudits for the extensive work he did at the factory in pre-season to adjust himself to his new surroundings as quickly as possible.

He hit the ground running as a result, and ended up outscoring Leclerc by the end of the season after taking his fourth podium of the year in Abu Dhabi – leapfrogging his team-mate and Lando Norris to take P5 in the Drivers’ Championship in the process.

Sainz and Leclerc have formed a strong rapport between them while racing alongside each other, and the Spaniard says they have learned from each other to try and improve this year.

But in the early stages specifically, Sainz admitted he had to “copy a lot of stuff” from Leclerc in terms of how he was driving to get the most from his car.

“Since the moment I arrived to winter testing in Bahrain, I had a lot of things to learn from Charles,” said Sainz, quoted by Motorsport.com.

“The way he was driving the Ferrari in a particular way to be as quick and fast as he’s being all year long, I’ve had to adapt myself [to it], I had to copy a lot of the stuff I was seeing on the data.

“Sometimes it was difficult to believe it was possible to do that, and it was so crazy-quick it was actually a bit shocking. But little by little, adapting and trying to learn from him, I managed to get to a good level.

“There are still things that when we go into the winter break, he’s much stronger than me in certain areas. We will exchange some information and try to both become better drivers learning from each other.”

Sainz signed on an initial two-year deal with the Scuderia for 2021, and team principal Mattia Binotto said he is already considering extending his contract off the back of his consistency this season.