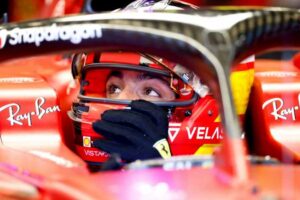 Carlos Sainz concedes Ferrari “needed” this season’s new regulations to get back on top as Mercedes and Red Bull’s advantage prior to 2022 was “very big”.

Ferrari last played a part in a championship fight in 2018, Sebastian Vettel runner up to Lewis Hamilton.

But with the German winning just one grand prix in the back half of the season, and Hamilton six, it never really felt like Vettel stood a chance.

The following season the Scuderia won just two grands prix before two win-less campaigns in 2020 and 2021.

This year, at least in the early running, Ferrari are the team to beat with Sainz and his team-mate Charles Leclerc.

The latter is leading the Drivers’ Championship with 45 points with Sainz second, 12 points adrift. Ferrari are also on top of the Constructors’ standings, 40 points up on Mercedes.

Sainz concedes Ferrari needed the regulation reset to get back on top.

A solid start to our #AusGP weekend. Time to keep pushing and see it all the way 💪#essereFerrari 🔴 pic.twitter.com/n7JYIMU2es

“It’s been a few tough years for Ferrari,” he said, “and these tough years, we’ve used them to rebuild a bit the team in the internal side of it, to try and make ourselves stronger, become better at what we do.

“We’ve used the regulation change of having to start from zero, and a blank piece of paper, like we’ve done this year, to use this, this improvement in the way we work to put it into practice and suddenly be back at the top.

“I’ve always believed that Ferrari had the right people and the right mindset to be where we are right now. But we needed a blank sheet of paper because Red Bull and Mercedes with the previous regulations, they just had a very big advantage on the rest of the field.

“We felt like that gap was very difficult to cut back without a reset. And this reset has given us the opportunity and we’ve used it in a very good way. So now, it’s our job to keep ourselves up there.”

The Spaniard, twice on the podium already this season, is thoroughly enjoying Ferrari’s return to the sharp end of the Formula 1 field.

He continued: “Certainly, as a Ferrari driver, it’s just great to see it, and see the excitement of the tifosi coming back and give them back a bit what we’ve missed in these last few years, because it was definitely not where we want it to be, but you could already feel it here in Melbourne and in other places that people are getting excited again.

“And this is good, I think, for the sport and for Ferrari.”