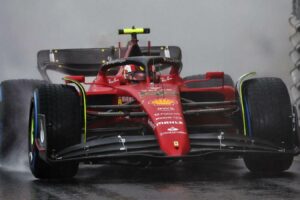 Carlos Sainz has blamed the lapped Nicholas Latifi for costing him a first F1 victory at the Monaco Grand Prix.

Runner-up for the first time on the streets of Monte Carlo last year, Sainz repeated that finishing position – only this time he passed the chequered flag a mere 1.154sec behind winner Sergio Perez.

A race badly delayed by heavy rain and a further red-flag stoppage after a Mick Schumacher crash ended with the two Red Bulls and two Ferraris separated by less than six seconds when the two-hour time limit, plus one more lap, had been reached.

Sainz could never make a move on Perez in the closing stages with overtaking extremely difficult, but the Spaniard felt his best chance had gone when conditions were drying up.

The 27-year-old had worked out going from extreme wet tyres to slicks, rather than intermediates, was the best move, but on lap 21 he was the victim of the overcut as he ended the pit-stop phase second on the road behind Perez who had stopped a lap later.

However, Sainz felt he could have made his strategy work but for getting stuck behind Latifi in the lapped Williams.

Onboard footage of Sainz's outlap where he was stuck behind a lapped Latifi. Latifi ignored blue flags from Saint Devote until the exit of Portier. Ultimately cost Carlos the win.#F1 #MonacoGP #CarlosSainz #ScuderiaFerrari pic.twitter.com/DMPeZsO3ke

“I felt like we did everything we had to do out there,” said Sainz in his parc ferme interview.

“You can understand the frustration because a clean out-lap would have secured me the win today, but it’s how this sport is sometimes.”

Asked about his decision to skip intermediates – a suggestion he had made himself over team radio from an early stage – Sainz added: “I knew it from halfway through the first stint. I started to see the dry line and started to realise it would go straight to slicks.

“I think we did the right call as we were leading the race, basically. Then we pitted for the hard tyres – the hard is never easy on the out-lap but I had to do 12 corners, something like that, behind a lapped car. That cost me at least a couple of seconds, that cost me a race win.

“Anyway, I’m not going to complain too much. You know this sport is like that. Checo was unlucky in Jeddah, obviously today he did a great race plus he got a bit lucky with myself, and in this sport it will turn around one day or later.”

Sainz said that as the leading four formed a train with the race clock ticking down, he had been able to resist the temptation to make a lunging move for the lead on Perez.

“You can see I have quite a lot of graining myself too, especially at the rear, which made the entry into the tunnel quite difficult to get close and to pass,” he said.

“A couple of times I was really close to launching a move into there, but it was still a bit wet on the inside. Checo was braking quite late, so I think if I had braked any later I would have taken him out with me.”