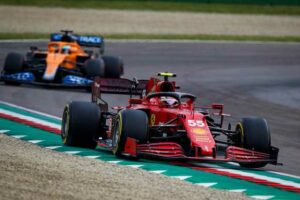 Carlos Sainz says he has enjoyed the challenge of having to “change quite a lot” in how he drives to get the most out of his Ferrari.

The 26-year-old says his current car is “very, very different” to what he had previously driven at McLaren, and has made efforts to go to the factory at Maranello as often as possible to aid his transition to the team.

This approach has paid dividends, with the Spaniard sitting just two points behind Charles Leclerc and arguably making the strongest impact in his new team of all the drivers that switched garages for the 2021 season.

His P2 finish in Monaco was a just reward for a strong weekend for Ferrari, where Leclerc had qualified on pole but could not start his home race, before Sainz jumped up to the podium places behind only Max Verstappen, while finishing ahead of his former team-mate Lando Norris.

Sainz has previously asked for patience from Ferrari fans while he gets up to speed in the car, but is having fun with the learning process behind the wheel with the Scuderia.

“My driving style and the way I turn in, brake, carry speed through the corners in different places and different corner types is very different to last year,” Sainz said, as per Motorsport.com.

“I’m having to push myself to open my mind and adapt as a driver. And I actually find it really good fun.”

A day "OFF” in Madrid with Carlos Sainz ⤵️https://t.co/M1aRFqgpYy pic.twitter.com/DswNJ715zd

While the Spanish driver explained there were significant differences between how the Ferrari and McLaren behave on the race track, he was not ready to part with any information as to how they differ specifically.

“It’s something I keep for myself and my team,” Sainz said.

“Obviously the McLaren might have changed a bit also with the Mercedes power unit. Especially this year, they look particularly good on the straights and and they are very, very strong in that area.

“But driving-wise and balance-wise, doesn’t matter if it’s low-speed, medium-speed and high-speed, they are completely different cars and I am having to change quite a lot and adapt.

“I know the difference, but I’m not willing to tell you now.”