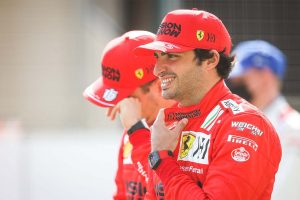 Carlos Sainz has clarified comments over him wanting to become World Champion within five years, claiming his words were “misinterpreted”.

Sainz was part of McLaren’s best on-track performances since 2012 last season, as they finished P3 in the Constructors’ Championship, and he placed sixth as a driver.

This season, though, he takes to a new environment with Ferrari, hoping to change the Scuderia’s fortunes following their slump in 2020.

During the team launch back in February, Sainz said: “In five years, my target is to be a World Champion. I do believe that Ferrari is the best place to try and achieve that. I think I am in the right place at the right time and we just need a bit of time to try and make it happen.”

He has now moved to clarify those comments.

“Charles asked me ‘where would you wish to be in five years?’” Sainz explained, as quoted by Autosport.

“Obviously my honest answer is, what do I wish? I wish I was world champion in five years, which is a very obvious answer for any Formula 1 driver if you ask.

“I think that was misinterpreted to say ‘I want to be World Champion in five years’, which is a common mistake sometimes the media does or what people do when interpreting the messages and changing a bit around my words from that question.

“I wish I could be a World Champion in five years of course, but I know it’s going to be a very, very tricky task to do. There’s a lot of competition in Formula 1 nowadays.”

Sainz and team-mate Charles Leclerc have shared the driving responsibilities at the Bahrain testing, and the Spaniard revealed after his Friday session that he does not yet feel ready for the first Grand Prix at the end of the month.

He has, though, stressed that he is happy with the Scuderia, saying he is “in the right place”.

“I am looking forward to try and build a bit of stability here in Ferrari,” Sainz added.

“The first couple of months have been very good, I’ve found the stability, I found that team that has welcomed me in a really nice manner and I’m feeling really comfortable.

“Let’s see how it goes, but I’m looking forward to it.”