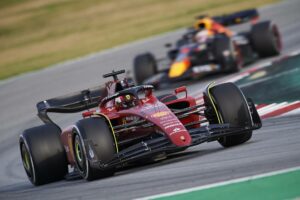 Carlos Sainz has put Formula 1’s new stated aim to the test – and “already felt some differences” in following another car.

The sport’s much-changed aerodynamic regulations, producing a fleet of entirely redesigned cars, have been introduced to try and make following a rival at close proximity easier, leading to more overtaking moves and exciting racing throughout the pack.

With only 10 cars on track in testing, often going at different speeds due to their run programmes, the sessions in Barcelona this week and Bahrain next month will not serve as the acid test of F1’s goal.

But there will be opportunities to trial following and passing, and Sainz has already done so – finding some noticeable differences as he put the Ferrari F1-75 through its paces.

Another productive day completing the whole run programme, which right now is the most important thing. I also started to work on my driving style, gaining confidence with every lap. Satisfied so far with our work, let’s continue this trend!

Put to him during an interview with Formula 1 that he had been spotted following the new World Champion, Max Verstappen, in the Red Bull for a few laps, the Spaniard said: “We did that on purpose obviously, and I can tell you I already felt some differences.

“It’s pretty obvious already and I’m relatively positive about it – optimistic that it’s, I think, going in the right direction.”

The first two days of action in Barcelona were very positive too for Ferrari as not only did they put together lengthy, undisrupted running with the F1-75, they were also at the top of the timesheets along with their most direct rivals of 2021, McLaren.

Asked before his team-mate Charles Leclerc had gone out for the second afternoon’s action if it felt like a good start – with the Monegasque going on to set Thursday’s fastest time – Sainz said: “Let’s see when we go to a race and see how it goes.

“But for sure, a day and a half without problems in the car, managing to complete the whole run plan and doing plenty of laps is a good start – especially here in Barcelona, so [I’m] happy to do all the laps I’ve done.

“It feels not like a good start in terms of feeling but a normal start, I would call it, because we didn’t have any single problem so far and I managed to do a whole run plan.

“As I said, if it’s good or bad I don’t know because these Formula 1 cars can go three or four seconds quicker if you want, or slower, so we don’t know where everyone stands in this situation.”

Asked to send a message to the tifosi, Sainz responded: “That they can be happy the team have done a reliable car so far, and that they give us time to go and search [for] performance because we are nowhere near there yet. Be patient.”