Home » Racing » Carlos Sainz admits: I overstepped it in final part of qualifying

Carlos Sainz admits: I overstepped it in final part of qualifying 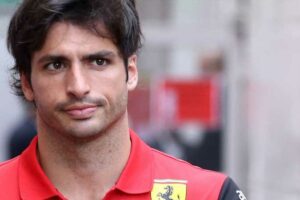 Carlos Sainz said he knew that he had pushed too hard on the final run in Q3, costing himself a possible front-row start.

Ferrari’s Carlos Sainz will start Sunday’s Azerbaijan Grand Prix from fourth place on the grid, having failed to improve his time on the second run in Q3.

The Spaniard had set the pace on the first runs in Q3, clocking a 1:41.814 to clinch provisional pole position.

However, Sainz had a wild second flying lap as he slid his way through the first sector to lose four-tenths of a second immediately. With teammate Charles Leclerc and both Red Bull drivers improving on their second runs, Sainz fell down to fourth.

Despite this, the Spaniard put a brave face on things as he spoke to media after the session.

“Yeah, it’s a pity but, at the same time, I think we’ve done some progress throughout the day,” he told Sky F1.

“I was feeling in contention for pole that, after the last couple of races, especially prior to Monaco, I wasn’t.

“So [it’s] good progress then and it’s what happens when you push to the limit.”

Explaining his approach to the final run in Q3, Sainz said that he had just gone over the limits of what was possible with the F1-75 in his determination to improve his time.

“Sometimes you take P1 like I did in Q3 round one, and sometimes you overstep it,” he said.

“Clearly, I did overstep it in Q3, but everything is still to play for tomorrow. Starting position here doesn’t matter that much, so we’re gonna push.”

Despite starting from fourth place, Sainz is optimistic of a stronger showing in the race as he believes Red Bull aren’t showing the same superior race pace as has been seen in practice at recent events.

“I think we have a pretty strong chance also in the race,” he said.

“I think it’s been neck and neck with Red Bull – normally Red Bull, 10 laps into a stint, they seem to have a bit better pace. But it’s yet to be seen this weekend.

“It is difficult to kind of predict right now. Long runs on Friday are never long enough to tell us that but, with a good start and smart strategy and driving, I think we can still be on the podium. At the moment, I think we’re neck and neck. Two-tenths here, two-tenths there.”