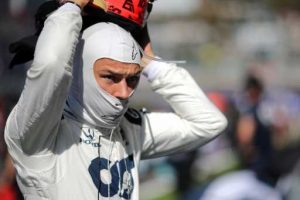 As F1 recorded its sixth positive case amongst the drivers, Alfa Romeo sports director Beat Zehnder acknowledges teams cannot “control” their people, they can only appeal to common sense.

Pierre Gasly is now the sixth Formula 1 driver to test positive for Covid-19, the AlphaTauri driver confirming the news on Sunday.

Gasly, who had been spending time in Dubai, is now “self-isolating and following the protocol set by the local health authorities”.

The Frenchman has been photographed interacting with people outside the bubble that he, and the other drivers, lived in last season.

No mask, and just hanging out in Dubai. Pierre Gasly on holiday. “Hope you’re all staying safe, guys” #F1

Not the only driver to be photographed with fans over the holidays, and without wearing a mask, it has raised questions about the F1 drivers’ actions.

Zehnder says one can only hope “common sense” prevails.

Speaking to Auto Motor und Sport about the measures Alfa Romeo took last year with Kimi Raikkonen and Antonio Giovinazzi, he said: “The greatest risk was always after the free weekends, whether with the driver or any other team member.

“We didn’t have any control over people, and we didn’t want to.

“So I appealed to everyone’s common sense and responsibility that they don’t do nonsense, don’t go to bars or regulars.

“Nobody can be forbidden from meeting family members or close friends but you should know how they are going. The drivers were instructed immediately.

“Everyone really behaved in an exemplary manner. We only had one case after the weekend off.”

However, even with the best of protocols in place, Alfa Romeo had 12 positives amongst its staff last year.

“I think it was five [at the factory],” he said. “We had seven on the racing team. Four to Sochi alone. Several teams were hit there. Evidently the interpreter of the catering supplier infected people across teams.

“In Portugal we had a case out of nowhere in the hospitality team. Despite the exact follow-up of the case, we still do not know where the colleague was infected. He was always with the group. Maybe it happened on the long way in the truck from the Nürburgring to Portugal, when refuelling or while eating. But an exact follow-up was not possible.

“One tested positive twice in Imola. It was proven to be a false alarm. We tested him at home every day for the following four days and he was always negative.

“We still had one case in Bahrain between the two races. And just one after a race-free weekend.

“I’m proud of how disciplined everyone was. It’s not easy to live in a bubble for so long. You also want to let off steam.”