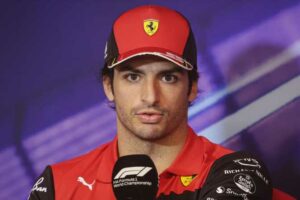 Carlos Sainz has urged his Ferrari team-mates not to be too disheartened by their recent run of reliability issues and reminded them of the big step the team has taken this year.

Having spent years fighting to be the third-best team on the grid, Ferrari propelled themselves back to the top of the table following the mass overhaul in regulations.

At the start of the season, it almost looked as if they would be taking both the Drivers’ and Constructors’ Championships at a canter after Red Bull suffered from early reliability issues.

But, as we approach the midway point of the season, the roles have reversed. Charles Leclerc has retired from two of the three previous races and Sainz joined him in Baku.

However, the Spaniard has urged caution and wanted his team to focus on the step up they had taken from last campaign rather than their recent issues.

“You cannot avoid the fact that we were coming into the season aiming to be competitive again and we managed to exceed even our own expectations by being so competitive,” Sainz told Motorsport.com.

🇦🇿Very tough result. We opened the gap to save tyres but a hydraulic problem hit us in Lap 9 and that was it. Together with Charles issue, it’s a difficult day for our team and fans. We are a very strong team and we’ll recover from this. Long way to go.

“We’re suffering recently with some reliability issues but, for me, it’s fine if it’s going to happen in the rebuilding process of the team and especially when you make such a big step on the engine.

“When you realise where we are coming from, and the step we’ve managed to do this year, all of a sudden, it doesn’t look that bad. We are just having a bump on the road.”

His team-mate Leclerc was almost levelheaded, despite not winning a race since Melbourne and seeing his Championship lead snatched away by Max Verstappen.

“I think the calmness is still the same,” he said, as reported by Motorsport.com. “I think it’s fundamental that we keep this calm, because it’s the thing that made us get back to those winning days.

“It’s obviously a tough time for the team now, after the last three races and the problems that we’ve had. We need to be calm, but obviously also aware that it is an issue that we need to fix as quickly as possible. But I think we find the right balance.

“I’m confident with this team, because they are giving 200% as always, obviously, and I’m sure that once we fix our issues, we’ll be able to catch back Red Bull.”