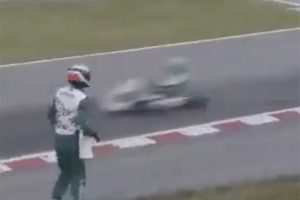 Karter Luca Corberi has received widespread calls for a lifetime ban after an absolutely deplorable act in a FIA Karting World Championship race.

Footage emerged online of the 23-year-old after he retired just nine laps into the 23-lap KZ Final race following a collision with Paolo Ippolito.

But, rather than head away from the race track, Corberi unbelievably picked up the broken bumper from his kart and waited for Ippolito to make his way around to him again. Once he did, Corberi subsequently threw the debris at Ippolito’s kart.

Karting driver Luca Corberi got mad at a race and then this happened. Should be a ban for life. pic.twitter.com/ofVoSif6fJ

Corberi did not stop there, either, as he also sought out Ippolito after the race and started attacking him.

Karter Luca Corberi continues to vent his anger after the kart race. Somebody arrest this guy. (via @EstagiariodaF1) pic.twitter.com/R9Kuk2VI4G

Formula 1 World Champion, Jenson Button, was one of  many dissenting voices after seeing the footage and wants CIK-FIA Karting president Felipe Massa to take some very serious action.

“Luca Corberi has just destroyed any chance he had at a racing career after his disgusting behaviour today at the FIA Karting World Champs,” Button wrote on Twitter.

“His father owns the circuit and is seen power driving the guy into a wall. Life ban for both of these idiots please.”

It was a race which saw Frenchman Jeremy Iglesias crowned FIA Karting World Champion after getting the better of Dutch racer Marijn Kremers.