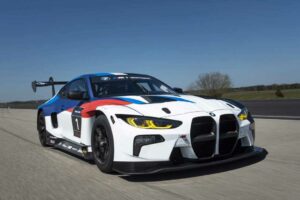 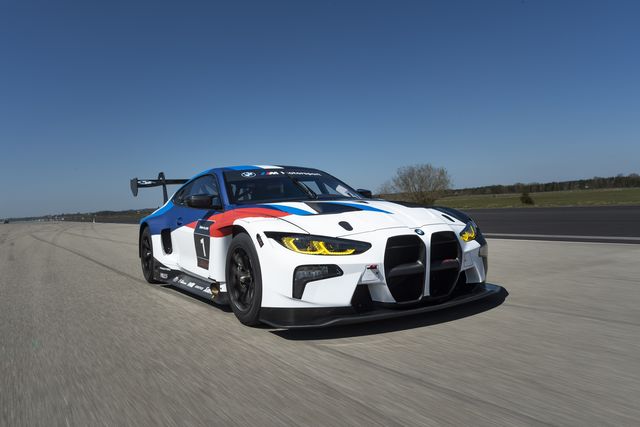 The mighty Bill Auberlin, winningest driver in IMSA history, likes the new BMW M4 GT3 race car and he hasn’t even driven it yet. He likes it so much, in fact, that the team he drives for, Turner Motorsports, already bought four of them. He won’t drive it until The Roar Before the 24 at Daytona next year. Other teams are taking notice, too.

“There’s more interest in this car than I’ve ever seen in any other GT3,” he said.

Understandably so. The new race car comes wrapped in carbon fiber body panels, with a new, race-stripped interior and a new powertrain. The engine goes from a V8 that powers Auberlin’s current M6 to a turbocharged straight-six making 590 hp, 10 more than the V8. Not only is it more powerful, but the six saves over 80 pounds of weight compared to the eight-cylinder. 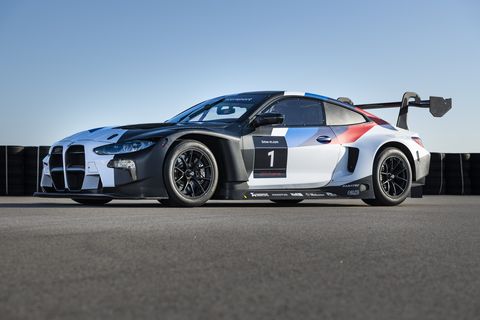 “It is brand new,” said Auberlin of the race car. “They’ve been developing it for the past 18 months.”

Outside, the new GT3 bears a strong resemblance to the production M4 Competition Coupe, including, yes, that grille.

The side view, the roof, and the angle of the front and rear glass are also identical to the production M4 Competition Coupe, at least in appearance. The panels themselves are made of carbon fiber on the race car, and each corner can be unscrewed and replaced in case some other car bashes into them. 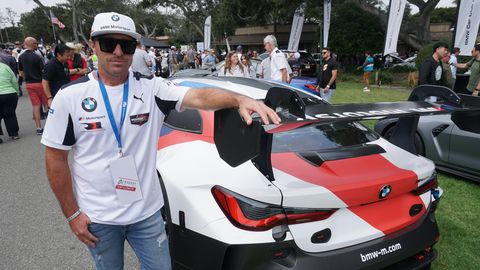 “This is the first time we’ve had fenders that are removable,” Auberlin told us during a walkaround of the race car at Legends of the Autobahn in Monterey.

The rear wing, of course, is pure racing-only. And the body is three inches wider in the rear on the race car.

“The tail of the BMW M4 GT3 is familiar in some areas, but in others it looks very different,” said Anne Forschner, exterior designer of the BMW M4 Competition.

“The racing car is three inches wider on each side, but we have carried over the rear lights from the production car and the rear contour of the trunk lid is also the same,” added Michael Scully.

The lighter engine under that lightweight hood also helps shift weight rearward, as does the new sequential, straight-tooth six-speed transaxle mounted aft of the differential. The transaxle is a development of the gearbox found in the BMW M8 GTE with improvements made in run time, cost efficiency, and performance, BMW says.

Separately, there are still similarities with the production M4 Competition Coupe.

“590 hp and 516 lb-ft (in the M4 GT3 race car) is the most powerful straight-six engine BMW has installed in a racing car since the days of the BMW M1 Group 5,” added Ulrich Schulz, head of drivetrain design, BMW Motorsport.

“The S58 found in the production M4 Competition is designed to deliver maximum performance on the track and thus serves as the perfect platform for the race unit,” BMW said. “Carried over components include the crankcase, cylinder head, crankshaft drive, crankshaft and connecting rods.”

Inside the GT3 race car is just one seat, of course, the latest FIA BMW M Safety Seat. It is in a fixed position for better crash performance. It’s the pedals that slide back and forth to accommodate different-size drivers. There’s even air conditioning, eliminating the need for heavy cool suits or other accommodations.

The steering wheel, in addition to activation of essential features such as traction control, radio, ABS, engine mapping, windshield wipers, and the drink system, comes off and fits directly onto your racing simulator at home so you can practice all those FANATEC track configurators you have on your computer. 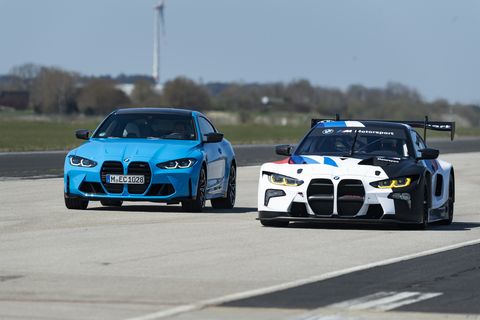 “The new BMW M4 Competition provides the perfect basis for the BMW M4 GT3, which engine was designed from the outset for use at the racetrack,” said Markus Flasch, CEO of BMW M GmbH. “This underlines how road car and race car development always go hand in hand at BMW M GmbH. The new car offers state-of-the-art technology, thanks to our technology partners. They are among the best in their respective fields, and we are delighted to have them supporting us on the development of the BMW M4 GT3 with their specific know-how and areas of expertise. That is the perfect basis for a successful new race car.”

While I myself have not driven the GT3 version, heck, even Bill Auberlin hasn’t driven it yet, I did spend a splendid couple of days in a couple of production M4s, both the standard model and the M4 Competition Coupe. In fact, I drove one up to Monterey and the other back down, using all of my favorite roads in between, winding through the best twisties of California’s Coast Ranges.

I liked both cars, of course, since they were made for roads like those. Now, you would think that something called a “Competition Coupe” would be too harsh for a long drive like that, and when I saw that my beloved media colleagues had snaked me out of my scheduled Alpina B7 for the ride home, I was prepared to suffer the whole way. But the car was so nicely setup up that it was downright comfortable, despite the carbon fiber seat and firmer suspension. I played around with the different drive modes and found that none of them was too harsh for a long day’s drive. By the time I pulled into Maricopa for gas I felt perfectly happy walking into the Shell station for junk food. I can only imagine that the M4 GT3 will treat Auberlin and his teammates as well as the street versions treated me. We’ll know come the end of January when the Rolex 24 Hours at Daytona is run.

Share your thoughts on the BMW M4 GT3—or on anything related to sports car racing. We’d love to hear from you.