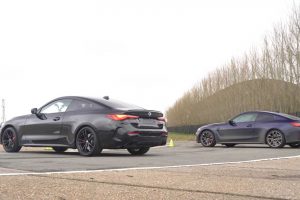 You’d never know the M4 has a massive horsepower advantage.

The current BMW 4 Series is available in a few flavors. The range-topper is obviously the fearsome M4 Competition and its twin-turbocharged 3.0-liter inline-six engine. A step down is the M-kissed M440i that also wields a boosted six, but is significantly less powerful. In U.S. spec, the M440i generates 382 horsepower (285 kilowatts) compared to 503 hp (375 kW) for the M4 Competition.

That’s the challenge facing the M440i in this drag race video from Joe Achilles on YouTube. Both Bimmers are brought to a nifty runway near London that’s been converted to handling track, where some performance comparisons ensued. Before the straight-line speed contest, each car was evaluated on the small autocross-like handling course, and to no surprise, the M440i was a good three seconds slower. It wasn’t just a power issue either; the car was more prone to understeer on occasion and just didn’t have the same front-end grip as the M4.

There were a couple of reasons for this, the first being tires. Sticky Michelin Pilot Sports graced the M4, whereas the M440i had a set of Bridgestone Turanzas. Perhaps of greater interest – especially for the drag racing to come – was the M440i’s xDrive all-wheel-drive system. It made the car feel heavier on the track, which of course, it was. Meanwhile, the M4 was skating along turning just its rear wheels, free to carve the corners at will.

With the corners removed, it was a different story. The M440i was downright heroic at speeds under 100 mph, taking a hefty starting line advantage and holding it across the line to actually beat the M4 in the first of three races. Admittedly, the M4 was charging hard at the other end of the track, but it still wasn’t enough for a win. As for the other two races, the action was just as close, though we’ll let the video reveal which car took the best two out of three.

One thing we will say – don’t get cocky if you find yourself behind the wheel of an M4 next to an M440i at a stoplight.