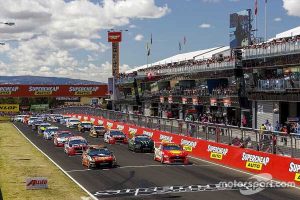 The 2020 Bathurst 1000 field is nearly complete, with just a handful of seats still up for grabs a month out from the Great Race.

Bathurst will play host to the sole two-driver round on a truncated 2020 Supercars schedule, with the other enduros at The Bend and the Gold Coast binned thanks to the COVID-19 pandemic.

With the recent confirmations of Dale Wood and Jack Perkins alongside Rick Kelly and Jack Smith respectively, there are now just four seats yet to be locked in – one at Kelly Racing (Andre Heimgartner), one at Brad Jones Racing (Macauley Jones) and both Team Sydney entries.

TCR ace Dylan O’Keeffe is rumoured to be the favourite for the Heimgartner seat, however that could be kiboshed by the fact he’s currently outside of Australia.

The Melbourne-based driver is currently in Switzerland, having been granted an exemption to leave Australia to take part in the WTCR opener at Zolder last weekend.

However, thanks to a strict cap on new arrivals coming back to Australia, there’s currently no guarantee he’ll be able to return and then serve his 14-day quarantine in time for the Bathurst 1000.

As for there #3 Brad Jones Racing Holden, former series full-timer Tim Blanchard – who also owns the Racing Entitlements Contract that underpins the entry – is expected to partner Macauley Jones.

There’s an equally logical outcome for Team Sydney as well, team owner and 2016 Bathurst winner Jono Webb likely to team up with either Alex Davison or Chris Pither for the Great Race.

Should that be the case that would leave just one available seat at former Tekno squad.

The regular 24-car field will be bolstered by a single wildcard, Garry Rogers Motorsport set to field rookies Tyler Everingham and Nathan Herne in one of its Holdens.