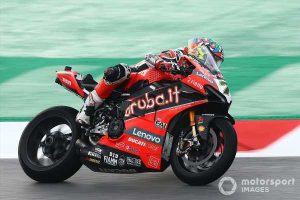 Ducati rider Chaz Davies became the seventh different rider to win a World Superbike race in the 2020 season after taking top honours in the final encounter of the weekend in Barcelona.

With championship leader Jonathan Rea dropping from the front row of the grid to sixth on the opening lap, the battle for the lead was blown wide open, with Michael Ruben Rinaldi, Davies and Superpole race winner Michael van der Mark all leading the race at one point.

Polesitter van der Mark got the best start and led the field into Turn 1, with the Ducatis of Davies and Rinaldi slotting into second and third position, as Rea fell to sixth place behind the GRT Yamaha of Garret Gerloff and the second Ducati of Scott Redding.

Rinaldi snatched the top spot from van der Mark soon after, but his lead proved to be short lived as Davies managed to pass Go Eleven rider on Lap 3.

Rinaldi initially kept Davies honest in the battle for the lead, the gap between the two staying under one second, but he slipped down to sixth on Lap 6, giving Davies some breathing space at the head of the field.

With van der Mark and GRT Yamaha rider Garrett Gerloff engaging in a close tussle for second position, Davies slowly started pulling away further clear of the rest of the field, eventually cruising to a comfortable 2.460s victory.

It marked Davies’ first triumph in WSBK since his victory in Race 2 at Laguna Seca last year – and made him the third Ducati rider to win a race this year after Redding and Rinaldi.

Van der Mark and Gerloff’s battle continued until the final lap, with the factory Yamaha rider holding on to second position by just 0.099s.

Rinaldi was forced to pull out of the race with technical issues two laps from the finish, allowing Rea to finish just outside the podium in fourth.

The Kawasaki rider had a muted race after winning the weekend opener and finishing second in the Superpole race, but still managed to extend his points lead as Redding could do no better than sixth.

BMW capped off the Barcelona weekend on a strong note with Tom Sykes separating the two two title rivals in fifth after passing Redding late on, and Eugene Laverty taking the flag in seventh on the other S1000RR.

Alvaro Bautista, who crashed out of the Superpole race shortly after taking the lead, failed to take a start after his Honda developed technical issues on the sighting lap.