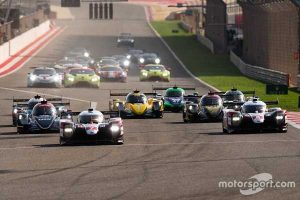 The #7 Toyota of Kamui Kobayashi, Mike Conway and Jose Maria Lopez won the final round of the FIA World Endurance Championship, the Eight Hours of Bahrain, beating the sister #8 car by over a minute in the winner-takes-all decider.

The #8 Toyota TS050 Hybrid of Sebastien Buemi, Kazuki Nakajma and Brendon Hartley, which had a 0.54s performance deficit in Bahrain under the system of success handicaps, finished runner-up in the LMP1 category’s swan song.

Porsche scored a 1-2 in GTE Pro, but Aston Martin claimed the title.