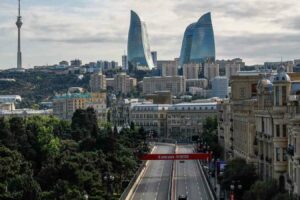 Azerbaijan GP executive director Arif Rahimov is not concerned by the crossover time which will see qualifying in Baku clash with the start of the Le Mans 24 Hours on Saturday.

Baku qualifying will start at 6pm local time [3pm UK] on Saturday, which coincides with the beginning of the world-famous endurance race at the Circuit de la Sarthe – in which 12 former Formula 1 drivers are set to take part.

But because of the way the session is spread out, Rahimov believes fans will be able to have the best of both worlds, as fans will not miss the key part of each session – given that the first grid slots are only decided after 18 minutes of Q1 running in Formula 1 – but it will mean some channel-hopping to do so.

“So I think with that, we can have the TV audience watch both: the start of Le Mans and the end of the qualifying.”

He added that “a lot of factors” had been behind the later qualifying time, and revealed that there had not been much conversation between himself and the FIA surrounding the clash.

Damon Hill expects Red Bull friction: "Watch this space… Red Bull can be quite a confusing team for when they have two guys who can be in contention, I think they somehow seem to leave one side feeling left out and the other side feeling favoured and you get this friction." #F1 pic.twitter.com/eeWpxP56KN

But the key thing from his point of view is that, for anyone wanting to watch both Le Mans and Baku, they will be able to see the most important elements of each without a clash.

“There are our internal factors here and all the other bits and pieces that we have to do on Saturday, like the F2 race,” he explained.

“So there is not usually as much choice with how to move things around time wise.

The race will start at 3pm local time on Sunday [12noon UK], which will mean the conclusion of the Azerbaijan Grand Prix will not clash with the end of proceedings at Le Mans.