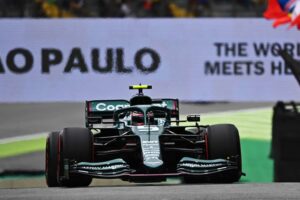 Aston Martin Formula 1 team principal Otmar Szafnauer says that current rumors linking him to a move to Alpine is, quite simply, news to him.

“I too read those rumors a couple of days ago and I was as surprised as anybody else,’ Szafnaur said. “But I just want to say it’s always humbling and flattering for people to say ‘Oh, if Alpine are reorganizing…”

“I think Laurent Rossi (Alpine Racing CEO) said that in Mexico and for the media to speculate that I could be wanted there, it’s always nice to be wanted.”

Szafnauer said he’s also unsure of where such a rumor would have gotten started.

“The first I saw was (French media outlet) AutoHebdo, and not being French I don’t know who they are, but I think it was translated into English from what my colleagues in the press office tell me.”

“Asked me for a clarification? No, he wasn’t in Mexico, he’s not here (in Brazil). He wasn’t feeling well,” Szafnauer said. “I’m sure I’ll catch up with him during the weekend, but no we haven’t talked about rumors. There’s lots of stuff that goes on in the media that we don’t talk about.”

Taken one step further, Szafnaur said he no intention of leaving Aston Martin.

“I’ve been at the team for 12 years, I’ve no intention of leaving,” he said. “I love this team, most of the senior managers—especially through Racing Point—and the senior leadership team was recruited and put there by myself and I have no intentions of leaving them. I’ve been loyal to this team. I’ve had many, many offers in the 12 years I’ve been working for this team, especially in the days of the bankruptcy and insolvency. I could have left many times but I’m loyal to the employees there.”

“I learned a long time ago that predicting the future is an impossibility, and if I could do that I’d be in Vegas now.”