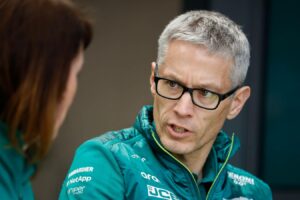 Aston Martin boss Mike Krack said the team will continue to work on the 2022 car despite half of the season being over already.

Of the 10 teams on the 2022 F1 grid, Aston Martin are perhaps enduring the most disappointing season. Since their rebrand from Racing Point in 2021, the team has been unable to hit the same kind of highs as they once had under the previous name.

They started 2022 with Sebastian Vettel missing the first two races due to COVID and found themselves with one of the slowest cars on the grid. Aston Martin then unveiled a heavily upgraded car at the Spanish Grand Prix and, despite protests from Red Bull that the new car bore a striking resemblance to their own, it did show an improved performance.

Vettel finished as high as sixth in Baku but the team has still been unable to extract what they believe is the top performance from the car.

With the season at the halfway point, teams are beginning to shift their focus for 2023 but Krack confirmed that was not the case for the Silverstone-based outfit. He described it as a “tough call” but said they “do not want to continue this year on this level of performance.”

Inspiring the next generation of F1 engineers.

AMF1 Team Principal Mike Krack and Head of Trackside Integration Mark Gray joined students at the @aramco @F1inSchoolsHQ World Finals to talk about careers in engineering and the importance of STEM.#F1SWF22 #MeetTheFutureFacesOfF1 pic.twitter.com/STrbhXGs3z

“Yes, we want to continue developing this car,” he told F1.com. “Obviously we need to respect the financial implications that we are having – but we have a plan in place that we made a while ago that we are trying to follow as much as we can.

“Obviously you always have to adjust it depending on what is your wind tunnel result, what is your latest race result, but we’re very confident that we can improve it further, and we will do so race by race.

“It’s a tough call, but… we’re only halfway into the season, we must not forget. We do not want to continue this year on this level of performance.”

Looking to the future, Aston Martin hope it will be Vettel in the seat and Krack said he is “confident” will keep the four-time World Champion on board.

“We are in talks. Sebastian is very positive, very constructive, so from that point of view I really hope we can continue.

“Also, maybe the investment he has made now over two years, he should also maybe be in a position to get something from it and not hand it to someone else later. But we are confident we can make this a success with the talks we are having.”