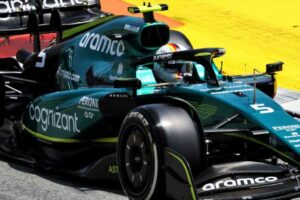 Mike Krack says Aston Martin decided “long before any cars were public” to go down the route that so happens to be the same as Red Bull’s with the design of their 2022 car.

Putting a ‘green Red Bull’, as it has been dubbed, onto the track in Spain, Aston Martin raised eyebrows in the paddock and with the FIA.

Said to have been “alarmed” by Aston Martin’s upgrades for the Spanish Grand Prix, the FIA investigated but cleared the team of any wrongdoing.

A spokesperson for the team told PlanetF1 that the FIA had “confirmed in writing that our update was generated as a result of legitimate independent work in accordance with the Technical Regulations”.

But even if with the FIA’s investigation, there are still questions about whether Aston Martin drew inspiration from the Red Bull’s design.

Team boss Krack says no, they started on this path before even seeing the RB18 for the first time in pre-season testing.

“Our chassis is designed to be relatively flexible, so we can change the direction we’ve taken.

“We launched different programs and then decided at some point that we had to go in a different direction. But that was long before any cars were public.”

Speaking to Sky F1, Krack added: “You will remember when we had the launch of the car, [we were] already mentioning that we had built in some flexibility in the car, to be able to develop along the journey, and this is what we have done.

“From that point of view, it was just a normal development process.

“We had all the porpoising difficulties with the other spec car, and we said at one point we need to change, we need to make a little update here, and that’s what we did in the end.”

Aston Martin are ninth in the Constructors’ Championship having scored just six points.

But while the FIA have cleared Aston Martin, Red Bull have not.

The Milton Keynes squad has launched an investigation to see if any of their IP was passed onto Aston Martin when some of their team members swapped allegiance.

While team boss Christian Horner concedes that the seven Red Bull personnel who swapped to Aston Martin cannot wipe clear the “knowledge” they have of the RB18 design, he added: “What isn’t fair and what is totally unacceptable, which we wouldn’t accept, is if there has been any transfer of IP at all.”