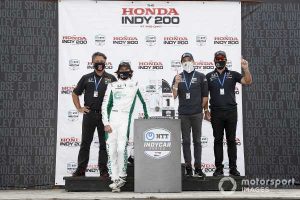 Andretti Autosport announced today it will partner with the new Evolution Development Group that aims to boost promising athletes’ chances by having fans invest in them.

EVO is the brainchild of its CEO Jim Norman, father of former Andretti Autosport Indy Lights race winner Ryan Norman. The concept involves providing “everything from management and training, to promotion and nutrition for drivers who have been scouted by Andretti Autosport and EVO and are promising champions but need the extra support to help them succeed.”

Individual investors will get a cut of the earnings of all EVO athletes from various individual professional sports. The athletes’ chances of successes will be boosted by EVO’s “successful veteran coaches, trainers, managers, nutritionists, and more.”

Michael Andretti commented: “The biggest problem with racing is that it’s very expensive to race. You can have all the talent in the world and love it more than anything, but if you don’t have the backing, you’re probably not going to make it… To have a platform like EVO is huge for a young, true talent.”

Norman added: “EVO is solving a problem for Andretti Autosport by further developing drivers that otherwise may be left behind because they lack the resources to become tomorrow’s champions, but not the talent. EVO plans to offer athletes everything they need to reach their goals, and the Andretti Autosport partnership is the first step in building future athletes.”

Andretti told Motorsport.com: “It’s an opportunity for a fan get involved and hopefully help a young kid reach stardom. It’s a great program.

“We all know there’s so much talent out there who missed out because they didn’t have the funding to get to the next level, and I’m talking about right down to go-karts. If we can start getting these promising kids out of karting and into USF2000 and help them continue up through the system, I think it can only help the sport in the long term.

“I also think it’s an exciting idea for fans to be able to invest in these young drivers and have a long-term attachment to their career development.”

Even before supporting EVO, Andretti was already regarded as the IndyCar team owner most dedicated to nurturing young talent in the Road To Indy program. He guided Raphael Matos, JR Hildebrand, Pato O’Ward and Oliver Askew to the Indy Lights championship, and made sure that two-time Lights runner-up Colton Herta moved up to IndyCar in 2019.

Indy Lights was canceled this year, but Andretti revealed yesterday that his four-car program will return for 2021. But even below Indy Lights, Andretti Autosport has run cars in both Indy Pro 2000 and USF2000, and he believes that ties in well with EVO’s aims.

“Hundred percent, yeah, that’s exactly what working with EVO is about,” he said. “I’d love to be able to bring another potential superstar up through the program and into an IndyCar. That’s the plan – to keep doing that.”