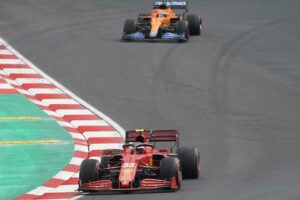 Andreas Seidl is happy with McLaren’s result at the Turkish Grand Prix despite the fact that Ferrari scored far more points.

After being stronger than the rest of the midfield and fighting at the very front in the previous two rounds, the British team struggled at Istanbul Park with Lando Norris and Daniel Ricciardo only finishing in P7 and P13 respectively.

To make matters worse, their closest rivals in the standings, Ferrari, scored far more points thanks to P4 and P8 finishes for Charles Leclerc and Carlos Sainz.

Given the Italian team were much stronger though, Seidl saw the weekend as a case of damage limitation and is fairly happy with the outcome.

“On Lando’s side, it was not possible to do anything more than he did,” he said after the race.

“It was a very tricky race in tricky conditions. Together with the team, he maximised everything that was on the table.

“Seeing the performance of our car this weekend, with the result, in the end, we can be happy with the damage limitation.

“We are still seven and a half points ahead of Ferrari in the Constructors’ Championship and we simply have to keep going.”

Just how much stronger Ferrari were than McLaren was made abundantly clear by the fact that Sainz and Ricciardo started alongside each other at the back of the grid and the Spaniard had a far easier time climbing up the order than the Aussie did.

While the sizeable gulf in performance between the two teams may have been a surprise to outsiders though, Seidl and co expected it.

Not because of any specific issues with the McLaren car, but just because they struggled at similar tracks to Istanbul Park earlier this season.

“No, because they simply had a car that was a lot quicker this weekend and in the end, we also saw that in the race,” he said when asked if he was surprised.

“From the first outing onwards we could see the Ferrari car was simply a stronger package throughout the lap.

“I don’t think there was one specific area. We are struggling on these kinds of tracks which we have seen several times this year that resulted in a clear lap time gap.

“That was why it was a lot easier for Carlos to get through the field.”