Alpine were left in the dark over shock Fernando Alonso move 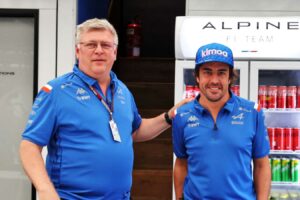 Alpine team principal Otmar Szafnauer said he only heard about the departure of Fernando Alonso when his move to Aston Martin was officially announced.

Alonso’s shock move to replace Sebastian Vettel from 2023 on a multi-year deal came on Monday morning, as Formula 1’s summer break got underway.

Alonso said last week that his future with Alpine could have been decided in “10 minutes” of talks, but his switch of teams came as a big surprise to the whole Formula 1 community – and not least to Alpine themselves.

They had been in talks with Alonso over a new deal from next season, but the two-time World Champion accepted the advances of Lawrence Stroll to head to the Silverstone team instead, swiping him from under Alpine’s noses.

The Alpine team principal confirmed he had been assured by Alonso that nothing had been signed over the weekend, but the move has now been announced and he has not contacted him since then.

“It was the first confirmation I had,” Szafnauer said to reporters, quoted by Autosport.

“Obviously, when we’re in the paddock, there’s all sorts of rumours, and I had heard rumours that Aston were interested.

“Once you hear that they’re interested, there’s probably discussions that took place and there’s some other indications that discussions took place, like walking out of the same motorhome at the same time, all that kind of stuff, which I saw.

“But I was confident that, even with the discussions, and there’s nothing wrong with exploring, that we were very close.

“So yes, the first confirmation I had was the press release. I did ask the question and I was told: ‘No, no, I haven’t signed anything.’ So I was a bit surprised.

“I haven’t talked to him, since he’s on a boat, I think, in the Greek Isles somewhere.”

Szafnauer added that a new contract with Alpine had almost been finalised, bar a few “minor details” which were to be ironed out, and talks would resume in “a couple of day”, with Alonso giving assurances that he had not signed elsewhere.

But given the security of having more than one guaranteed year on his contract with Aston Martin, Szafnauer elaborated further on the offer that had been presented to Alonso.

“We offered a one plus one deal,” he confirmed. “And we discussed with Fernando that: ‘look, if next year at this time, you’re performing at the same level, of course, we will take you and that could have carried on’.

In terms of giving Alpine a heads-up about him leaving the team, it probably wasn’t the most polite way of ending a relationship…

But on the face of it, Alonso’s logic seems simple. He was offered one guaranteed year at Alpine in a ‘1+1’ deal, but Aston Martin offered him more than one year straight away, he likes the ambition the team have, and he’s taken the chance available to him.

However, signing a contract there on the sly and having it announced to the world before Alpine even knew will feel like a complete side-swipe to the team, who are now scrambling to try and get a suddenly-in-demand Oscar Piastri signed, now that McLaren are reportedly in the mix for his signature.

Fernando Alonso rarely retreats quietly, and he certainly knows how to make people take notice of his movements.