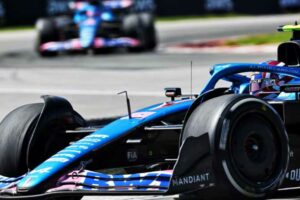 Alpine team principal Otmar Szafnauer feels the team can fight for a race victory and podiums this season, but is keeping realistic about their prospects.

Fernando Alonso mastered the changing conditions in Montreal on Saturday and put his Alpine on the front row alongside Max Verstappen.

He found himself falling backwards on Sunday though, through a combination of strategy and a lack of pace relative to those ahead after suffering an engine issue in the second half of the race.

He eventually crossed the line seventh, but a five-second penalty for weaving on the straight while defending from Valtteri Bottas dropped him down to P9 by the end.

Despite that drop in places, however, Alpine closed the gap to McLaren in the Constructors’ Championship to eight points, with the fight for P4 behind the front-runners starting to heat up.

Szafnauer said Alpine are aiming high for the rest of the season, even feeling that they can take to the top step of the podium – as Esteban Ocon did in Hungary last year – should circumstances fall into place.

Nico Rosberg on Fernando Alonso: "We all know that talent and skill-wise he is one of the best of all time.

"He sometimes lacked that social competence – had difficulties to be in the best teams with the best cars because of burning bridges in the past." #F1

“So I think we have to be realistic,” Szafnauer told the F1 Nation podcast when asked about his expectations moving forward. “And if we do a good job from now, until the end of the season, finishing a solid fourth would be good.

“Yeah, for sure if we get the rub of the green, a win and a podium as possible,” he added.

“But I think looking at trying to overtake the third placed team with the amount of races that are left and the points that are available, will be difficult.

“But every once in a while, a podium and a win? Yeah, that could be possible.”

Alonso voiced his frustration at falling behind his team-mate later on in the race, not being allowed past despite being “a hundred times faster” than Ocon all weekend.

Szafnauer admitted there was a “large” gap between the performance of his two drivers, particularly in the wet on Saturday, through a combination of his age and ability to get up to speed quickly in changing conditions.

“It was large at the end, but not every lap,” Szafnauer explained. “So Esteban was making inroads, he was getting closer and closer.

“But you have to remember, in changeable conditions, Fernando is on it very quickly. And you know, he gets up to speed much quicker than most drivers do.

“I think he’s always had it. He’s always been on it very quickly, and experience helps too.”