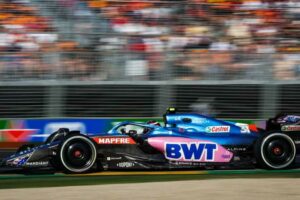 Alpine hope to transfer the kind of pace they have shown in qualifying sessions into the race and will bring upgrades to the car for this weekend’s grand prix at Imola.

The team have shown themselves to be one of the quickest on track this season and in the qualifying session for the Australian Grand Prix, only Red Bull could match the straight-line speed of the Alpine.

However, that speed has yet to translate to race day and reliability issues with the car have meant they are fifth in the Constructors’ Championship.

The French outfit are targeting this weekend’s Emilia Romagna Grand Prix at Imola as a turning point for this season and team boss Otmar Szafnauer is quoted by AS as saying it will be a “good circuit” for them.

A bittersweet result for us. Some good points, and a well managed race from Esteban for P7. Not the race we wanted for Fernando. #AusGP pic.twitter.com/FHB5polEXW

The 57-year-old went on to say he did not believe the team are “weak” in anything compared to the rest but “less strong” in some departments.

Given Fernando Alonso, alongside Red Bull’s Sergio Perez, recorded the quickest speed in qualifying last time out (322 km/h), the Alpine should be able to challenge for podiums come race day – and chief technical officer Pat Fry said that is the team’s target.

“Clearly our qualifying performance is relatively competitive since we’ve had both cars regularly in Q3,” said Fry as reported by racefans.net.

“Had we got things right in Melbourne we could have been as high as the second row.

“We need to improve our race pace and we are investigating what can be done. There’s always the right balance to be found between qualifying pace and race pace and we need to continue to work on this to get comfortable with the car on low and high fuel.”

In order to achieve this goal, the team will introduce an upgrade to the chassis for this weekend’s race and will test out a floor upgrade in Friday’s practice session.

“We are working through bringing weight-saving items to the car when and where we can,” said Fry.

“Although it’s a sprint race weekend we still have a new floor upgrade that we will test, so we’ll see how that fares in the sole Friday practice session. It’s a step in the right direction and it will be interesting to see how it performs on track.”