Home » Racing » All we can do with Daniel Ricciardo is keep working hard, says Andreas Seidl

All we can do with Daniel Ricciardo is keep working hard, says Andreas Seidl 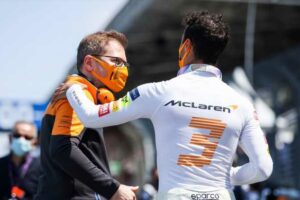 McLaren team boss Andreas Seidl has said all they can do is “keep working hard” as increased focus comes on Daniel Ricciardo’s future with the team.

Ricciardo’s Monza 2021 win sure does seem a long time ago now. The Australian has finished inside the points just once this season as his troubles with the McLaren car continue.

It seems just about everyone in F1 has an opinion on the future of the eight-time race winner from the likes of Eddie Jordan saying he was being “destroyed” by team-mate Lando Norris to Jacques Villeneuve saying he believe McLaren are preparing to swing the axe.

There have even been voices within the team have not provided Ricciardo with much reassurance. Zak Brown said Ricciardo had “not met expectations” and even spoke of an exit clause in his contract which is due to run until the end of the 2023 season.

Seidl though has not been so discouraging. The team boss said that Ricciardo is still getting used to the MCL36.

“In general, Daniel says it himself, he still doesn‘t feel 100 per cent with the car, especially when it’s about pushing it to the absolute limit in qualifying,” Seidl said, as reported by FOX. “He‘s up against a very strong team-mate as well, with Lando, and if you put both things together, that’s the gap we are sometimes seeing.

“Barcelona, in the race, it was simply not possible for Daniel to do a better pace [than 12th]. That‘s something we had to analyse after the race, which we did.

“We found an issue on the car which gave us an explanation, which was important, then we learned from that.”

The 46-year-old also appeared to be rubbish any rumours that Ricciardo was nearing the door and said that all they can do was to keep working hard.

“All we can do, together with Daniel, with a commitment on both sides, is to simply keep working hard in order to find these last percentages,” Seidl said.

Ricciardo himself said he had “thick skin” when it came to Brown’s comments.

“Well it’s not false,” he conceded when asked about what Brown had said. “It’s pretty true.

“Comments I don’t take personal. My skin is tanned, beautiful and also thick.

“And I know that I don’t want to be racing around 10th, 12th places you know, I still believe I can be at the front and belong at the front.

“So it’s been a little bit more certainly testing at times in terms of obviously trying to get up and maximise myself in this car.

“But yeah, we’re working together hard at it. And the team wants it. I want it. So yeah, we’re just working through it.”