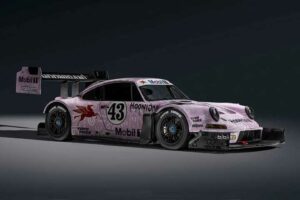 Had we told you nothing about this vintage 911 (which, now, of course, has precious little to do with a vintage 911), you’d probably guess that it had Ken Block’s fingerprints all over it. And, yes, this is the latest ‘Hoonicorn’, officially a product of Hoonigan Racing Division and adorned in a street artist’s idea of a livery – but actually it is built by BBi Autosport, a California-based outfit with extensive racing credentials. This is significant because the ‘Hoonipigasus’ (it’s an homage to the Porsche 917/20 Pink Pig of seventies fame) isn’t intended merely for creating noise and tyre smoke on film; in fact, it’s been built for an actual real-life motorsport event. Namely, next month’s Pikes Peak International Hill Climb.

Now, you don’t need us to tell you that achieving overall victory at The Race to the Clouds is no mean feat. Bentley tried and failed just last year. It requires a custom-built vehicle of preposterous specifications to stand any chance at all. Hence BBi Autosport’s involvement. Just last year the team entered three cars in different classes and brought back two wins and a podium. In other words, they know how to get it done. Consequently, while it may certainly look like a Hoonigan product, the car underneath is very much theirs, and is said to have spent the best part of ten years in gestation.

“The Hoonipigasus is an absolute dream-come-true type of build,” said the founder of BBi Autosport, Betim Berisha. “It doesn’t get any more mental from a tech, power, aero, and visual standpoint. The original vision of the car came from a longtime friend of mine, Joe Scarbo of Scarbo Performance, nearly a decade ago. We then teamed up with our most talented engineers and designers, threw the book out, and took an unconventional path. We are building the world’s nastiest 911.”

Of course, save for the headlights and the doors and a bit of roofline, the Hoonipigasus is almost entirely bespoke. It features a mid-mounted twin-turbocharged 4.0-litre flat-six, reportedly tuned to produce around 1,400hp. Naturally this power is sent to all four wheels, with a transmission tunnel – known internally as the ‘Chorizo Tunnel’ for some reason – that goes from shoulder height down to the front axle, apparently resulting in a lower centre of gravity. Elsewhere the car gets GPS height-adjustable suspension which makes use of the previous year’s telemetry data. All of this in a car that weights just 1,000kg.

Block himself is no stranger to Pikes Peak. He actually raced there back in 2005 in a (comparatively) lowly Group N rally car – and returned in 2017 to film ‘Climbkhana’ in his methanol-fuelled 1965 Ford Mustang Hoonicorn RTR V2. That machine was nothing if not memorable, but obviously it was built for show. As a result, this is the Head Hoonigan in Charge’s first go at the upper echelons of the competition – and in the 100th running of the event, for good measure – although plainly the thought has been on his mind for a while.

“The Pikes Peak Hill Climb is why I’m a rally driver,” commented Block. “The list of drivers who have raced and won this hill climb includes many of my heroes: Walter Rohrl, Ari Vatanen, Michèle Mouton, Sébastien Loeb and Rod Millen to name a few. I’ve always wanted the chance to race Pikes Peak and compete for an overall win. With our team and BBi Autosport creating this amazing Porsche, we’ve got a good shot at that win, and with Trevor’s wild livery, inspired by one of the most famous Porsches in history, we’ll be hard to miss. I’m stoked to be a part of this iconic race and totally up for the challenge to add my name to those that have gone the fastest overall in the most technically challenging hill climb on the planet.”