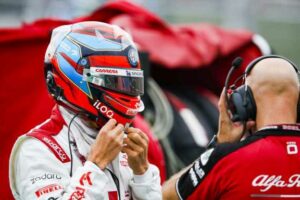 Alfa Romeo have applauded the “unique character” that is Kimi Raikkonen after the Finn announced that 2021 would be his final season in Formula 1.

There was, however, no word on who might replace him.

After 19 seasons in Formula 1 and what will be, come the end of 2021, more than 350 race starts, Raikkonen is walking away from the sport.

After months, if not years of being asked when that moment will arrive, it finally did on Wednesday.

The 2007 World Champion took to Instagram to say: “This is it. This will be my last season in Formula 1.

“This is a decision I did during last winter. It was not an easy decision but after this season it is time for new things.”

His decision brings to an end one of the greatest careers in Formula 1, not only for his on-track success, but for the personality that is Kimi Raikkonen.

With a ‘bwoah’ instead of an answer, his dry humour and his dislike of all interviews, Raikkonen has endeared himself to Formula 1’s fans and will be sorely missed.

“Alfa Romeo would like to express all its gratitude to Kimi Räikkönen, as he announces he will retire at the end of the 2021 season,” read a statement from the team.

“For the incredible years spent together in his two stints with the team in Hinwil; for the work ethic, the passion for racing, the determination to succeed he displayed from his first test in Fiorano to last week’’ session debriefs.

“And for being a unique character, always true to himself – something that endeared him to everyone who worked with and for him and that won him the hearts of millions of fans worldwide.

“The team wishes Kimi all the best for an incredibly well-deserved retirement, in the knowledge that he and his family will greatly enjoy his presence at home after the final chequered flag in Abu Dhabi.

“In the meantime, we are looking forward to a successful conclusion of the 2021 season together, to bring such an illustrious career to the ending it deserves.”

The team gave no indication as to which way they are leaning when it comes to his replacement.

While the general consensus is that it is only a matter of time before Valtteri Bottas is confirmed by the team, other reports claim Theo Pourchaire could be in the running for a promotion from F2 to F1.