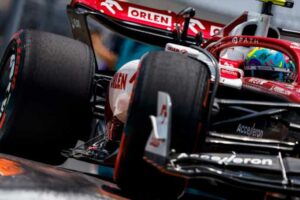 This season, Alfa Romeo took the unusual decision not to use Ferrari’s gearbox casing nor their rear suspension, a move away from yesteryear’s car.

While the C42 is still running the Ferrari gearbox, as it does the engine, the casing is the team’s own carbon fibre design.

Not only did this allow Alfa Romeo more freedom when it came to designing their rear suspension, it also saved them a bob.

“Today, if you are going with the Ferrari casing and suspension, this is killing you in terms of notional value,” team boss Vasseur told The Race.

This year, Alfa Romeo do not have to worry about reaching the $140million cost cap with Vasseur revealing they will come out “a couple of million” under it.

Next year though, the team’s budget will be the $135m the cap will fall to, prompting Alfa Romeo to take the step this season already to drop those Ferrari parts.

Vasseur added: “We are planning to be at the limit of the cost cap by next year and on this kind of choice, you have to anticipate questions in advance because clearly with the new regulations, we will have to do a carryover of some components between year one and year two or year two and year three.

“We will probably carry over the gearbox or the chassis between year one and year two and to have your auditing system like this. If you take the decision to go with Ferrari for the [gearbox] casing and suspension, you will carry over the parts and the notional value.

“And at one stage, the cost cap will go down and you will struggle – that is why we took the decision to go in on our own project. It was a bit ambitious.”

The Frenchman insisted the decision not to run Ferrari’s rear suspension and gearbox casing was purely financial.

“We had no doubt Ferrari were able to do a good suspension or good gearbox,” he said. “But the first approach was based on the budget and the cost cap for the season – and for the future.

“And also because it’s a bit easier to develop into the wind tunnel when you can do the development with your own parts.

“You know where you are, you know what will be the choice, you won’t have to wait [until] Ferrari will release the drawings.”

Alfa Romeo have been one of the big improvers in this year’s championship, the team fifth in the Constructors’ Championship with 31 points. Last season, they scored only 13 and finished P9.