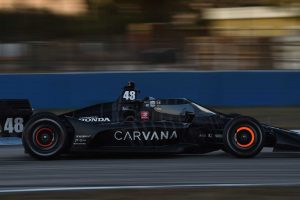 Jimmie Johnson has yet to turn a lap in an IndyCar race but is already making friends. The seven-time NASCAR champion will go road course racing in the open wheel series this season and has tested his Chip Ganassi Racing machine several times.

Johnson has always been known as one of the good guys in NASCAR. Despite winning 83 races and seven titles in a Hall of Fame career stretching back nearly 20 years, few drivers in NASCAR would ever have anything bad to say about him.

The group of divers in the IndyCar paddock is small. But Johnson’s good guy reputation seems to be continuing.

“He’s one of the nicest people I’ve ever met on planet earth,” Andretti Autosport driver and seven-time Indy race winner Alexander Rossi said. “It’s always nice to meet these guys that are super successful and also seem to be great at normal life. He’s a hell of a guy. He’s a great addition to the sport.”

Rossi first met Johnson in 2017 and knows the transition from stock car to IndyCar won’t be easy for Johnson.

“I think he’s fully aware of the challenge that’s in front of him,” Rossi said. “It’s, it was very difficult for me to go to V8 Supercars from Indy car for the one-off event that I did just because it’s completely different animal; a V8 Supercar is probably as close to the comparison as I can get to a Cup car.

“I know the struggles that he’s going to have coming over to the other side and relearning or unteaching, I guess, habits that have made him a seven-time NASCAR Cup champion. A lot of those driving styles and characteristics aren’t going to apply anymore. And that’s a huge thing to overcome, especially with the limited amount of testing.”

Rossi knows however that if anyone has a chance to succeed it’s Jimmie Johnson.

“Like everything that Jimmie does, he’s doing it in the best possible way and spending the time,” Rossi said. “And he has the people around him to help him succeed.

“It’ll be an interesting ride for him, but, you know, I think he’s doing everything correct so far at this point.”