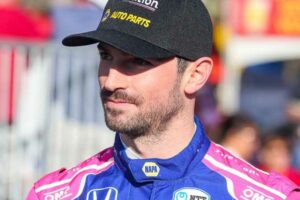 Doubling up on its American races and with a third coming next season, former F1 driver Alexander Rossi admits F1 is a genuine threat to IndyCar’s popularity in the States.

This weekend Formula 1 heads to Miami for a grand prix around the streets of Miami Gardens with the Hard Rock Stadium, the home of the NFL’s Miami Dolphins, the focal point.

It marks the first time that Formula 1 will race in America this season, the sport heading to Texas in October for the United States Grand Prix at the Circuit of the Americas.

Next season F1 will make three stopovers in America with Las Vegas joining the list.

Rossi, a former F1 driver who now competes in the IndyCar series, is excited to see the sport’s expansion.

“I’m just excited for Formula 1 and America, honestly,” he said as per Motorsport.com.

It’s been a long time coming to have multiple races in the States. It’s a big country. There’s no reason not to have three.

“Obviously starting next year in theory we’re going to have three. That’s an amazing thing.”

It does, however, pose a threat to America’s IndyCar series and its popularity.

Asked if F1 was now a competitor to IndyCar for a share of the motorsport market, he said: “Sure, it is, especially when you look at U.S. market share.

“With three races, it’s something we need to be aware of, certainly continue our development and plan in terms of what we’re doing with the series, with the driver personalities, the teams, the representation we have out there. I think it’s certainly a moving target.”

He urged IndyCar to up its game.

“One example of something that in theory is going to be awesome this year is Iowa,” he said. “That’s a promoter, a partner, that’s really getting behind an event, putting a lot of capital into it in the beginning.

“I think it’s going to be massive, right? … If that comes off as we’re all expecting it to, I think that lays a really good foundation for other tracks and venues that we go to as an example of this is something we need to do.

“We look at Long Beach being so popular, look at St. Pete, you look at Indy. It’s because it’s an event, right? Yeah, the racing is probably the majority of the reason why people are there, but not all of it.

“It’s hard to sell someone on devoting three days of their lives, with all the distractions we have in the world now, to just watch cars going around the track, right? It’s all the other things that are going to keep people captivated for the entire day, want to bring their friends and families out.

“I think Formula 1 has that kind of sex appeal to it.

“They’ve done a good job of marketing it, pushing that, displaying that. I think IndyCar to a certain extent needs to work on that, but also we just need to continue to push the product that we do have in creative ways.

“I think what we have is very special, but we just need to be creative and continue to push the envelope in terms of showing that to people.”