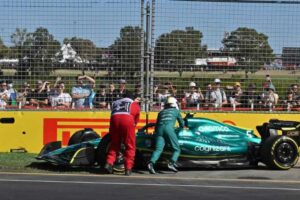 Vettel was hit in the pocket twice at the Australian Grand Prix, his first race weekend of the season having had to miss Bahrain and Saudi Arabia after contracting Covid.

The four-time former World Champion was initially fined 5,000 euros by the FIA for riding a scooter back to the pits along the track after his Aston Martin had broken down in FP1, at a time when no personnel should have been on the Albert Park circuit.

The following day, the German had to fork out another 600 euros when found to have been speeding in the pit lane during qualifying, taking his total amount of fines for the weekend to 5,600 euros (£4,631).

The 34-year-old described the scooter fine as a “joke” and also made reference to the 50,000 euros Max Verstappen had been forced to cough up for touching the rear wing of Lewis Hamilton’s Mercedes in parc ferme at last year’s Sao Paulo Grand Prix.

Sebastian Vettel to Autosport on his €5000 fine for the scooter ride:

"[It's a] joke. It would be good to know what happens to that money.

"I think we are still not aware what happened to the $50,000 that Max or Lewis or one of them had to pay for touching a rear wing." #F1 pic.twitter.com/FoBTuskhSm

Wurz, in his role representing the drivers, does not think fines are the right sort of punishment for a variety of reasons – including the mystery of where the money actually goes to.

“Nobody can do anything with the fines,” Wurz told ORF, quoted by Motorsport-total.com. “If the driver is fined, he should rather come to safety training on the kart track, do a day of junior work with the boys, that would be much better.

“Of course, everyone thinks Formula 1 drivers have a lot of money, but not all of them do. A lot of them have to pay back forever to pay the costs of the junior racing series.

“There are sums of money being thrown around that are simply not real in everyday life.”

And what about where the money from fines ends up? Like Vettel, Wurz, who achieved three F1 podium finishes in 69 starts between 1997 and 2007, would like to know.

“If we knew what would then happen with the money specifically, we would be much more comfortable,” added the 48-year-old Austrian.

“If the money is reinvested wisely and well in the safety of motorsport as a whole or in some charitable cause, we would be okay with that.

“But no driver, neither the GPDA nor anyone, knows what exactly happens with the money. We hope to talk to the new [FIA] president, Mohammed Ben Sulayem, that we change that and adapt it.”

Wurz, however, accepted it had been right to penalise Vettel for his impromptu Melbourne scooter ride.

“The track has a five-minute cut-off time after a practice session and he violated that,” he added.

“The marshal said you can go but he doesn’t need to know the sporting regulations, Sebastian should know. Accordingly, a penalty is justified.”