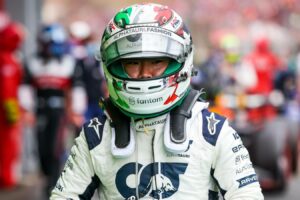 Yuki Tsunoda appears to be rewarding Red Bull for keeping faith in him, so commentator Alex Brundle hopes this becomes their new approach.

Tsunoda certainly did not have it easy in 2021, his rookie Formula 1 season, regularly trailing team-mate Pierre Gasly by a comfortable margin, while costly crashes also crept in far too often.

The Japanese racer realised though that he needed to work harder and get fitter, with a move to Italy designed to help him in those goals.

AlphaTauri announced that Tsunoda would be retained for 2022 and towards the end of the 2021 campaign, there were hints of the situation turning around as Tsunoda signed off with a P4 in Abu Dhabi.

And Tsunoda has kept himself on a positive curve early in 2022, delivering largely error-free drives which have scored him 10 points in the opening four rounds, compared to six for Gasly.

Alex, son of ex-Formula 1 driver and pundit Martin Brundle, feels there is something very likeable about Tsunoda’s character and believes that he is paying Red Bull back for keeping the faith and allowing him to continue as part of their driver programme.

That has not always been Red Bull’s approach of course, far from it in fact, but Brundle hopes that Tsunoda is proving to Red Bull that there is value in “nurturing” their young drivers, rather than demoting or firing them.

Speaking about Tsunoda’s progression on the latest Crash.net F1 podcast, Brundle said: “He’s worked on it, hasn’t he? He’s still full beans in the cockpit.

“The radio message when he made the pass late in the [Imola] race: ‘Let’s go!’ – it’s something I absolutely love about him and I want to see him succeed.

“I find myself watching him really wanting to see him succeed because he’s a human in the car, you can tell that as opposed to some other drivers that just come across and it’s no detriment to the character, in fact, it’s probably beneficial in the circumstances that they come across as a machine.

“Yuki definitely doesn’t, it’s something I really like about him. The incidents are fading out aren’t they and they are believing in him and the performances are coming back in.

“It really does show, there were stages through the middle of last year when he’d have an accident, Gasly performing at the front of the field, podiums, delivering and Yuki was nowhere to be seen in having incidents.

“People questioned [whether] he should still be there and they really believed in him, they kept him through this year and I really hope he can deliver on that because I’d like to see the programme move in that direction of nurturing rather than just ‘throw him in, no!’, ‘throw him in, no!’”