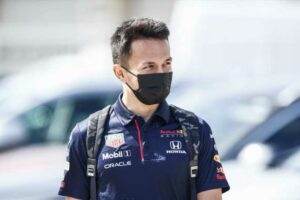 Alex Albon will be back behind the wheel for Red Bull when he conducts a two-day test of the 18-inch Pirelli tyres in Barcelona.

As part of the delayed new Formula 1 cars which will be in use as of the 2022 season, Pirelli will also upgrade their current 13-inch tyres to 18-inch replacements.

Formula 1’s tyre manufacturer have 30 days across 2021 to use with the teams on testing the prototypes, and already Ferrari, Alpine and Mercedes have had their first action on the new tyres to come.

Now it is Red Bull’s turn after it was confirmed that Albon will take to the Circuit de Barcelona-Catalunya on May 11 and May 12 as part of a two-day test.

@redbullracing will be testing 2022 #Fit4F1 18-inch tyres on Tuesday and Wednesday at @Circuitcat_eng with a familiar face returning: @alex_albon . He’ll be doing both days in Barcelona. @F1 @fia Ph. Credits @GettyImages pic.twitter.com/gnZfj88sa6

Albon raced for Red Bull for a season and a half before being replaced by Sergio Perez ahead of the 2021 campaign.

However, Albon remained a part of the team as test and reserve driver, with a clear focus on helping with the development of Red Bull’s 2022 challenger.

Alongside his testing duties Albon is also making some DTM appearances this year, but he has said previously that his work with Red Bull will be more influential in securing a return to the F1 grid in 2022.

“To be honest, not so much,” he told Autosport when asked if his DTM outings would play a role in engineering an F1 return.

“In my role, it’s more about doing my job the best I can in the championship itself.

“A lot of the Formula 1 stuff is probably a little more down to how other drivers are performing and whether there are opportunities on that side of things. But yes, there’s not so much requirement here. A lot of it is down to how it works with BoP [in DTM].

“My role also in the reserve driver, simulator duties and testing, that’s a much bigger role [in getting back to F1].”

Albon will not be the only driver in action though at the Circuit de Barcelona-Catalunya.

It has also been confirmed that on the Wednesday, Alpine will be represented by their reserve driver Daniil Kvyat.

Pirelli have stated that a third team will also be involved in the test, but are yet to confirm their identity.