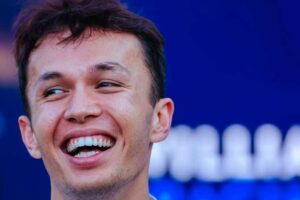 Unlike at Red Bull, Alex Albon believes he has been able to take on a team leader role with Williams.

Albon began his Formula 1 career in the Red Bull ranks, going from junior team Toro Rosso to Red Bull after half a season in 2019 before he was ultimately dropped to a reserve and test driver role for the 2021 campaign.

Now though, Albon is back on the grid with Williams and after a disappointing showing in Saudi Arabia, was able to bounce back from his exclusion from the qualifying results in Australia, due to the team failing to provide a fuel sample, to finish the race P10 and claim Williams’ first point of the season.

Albon has firmly established himself as the better-performing Williams driver over Nicholas Latifi and is really enjoying the vibe he is feeling of being a team leader.

“It’s a different position than I was in with Red Bull and I feel, more than anything, like I’m a bit more of a team leader,” said Albon on the F1 Nation podcast.

“I feel like I have to use my experience in the best way possible and develop the car with Nicky. I guess I feel like I’ve had a year to mature. I don’t think I could have done that in 2020 or 2019.

“I feel like I’m in a better position now. So I’m enjoying it. It’s a new challenge for me.”

Albon drew praise from Pirelli for the extreme strategy that helped him to that P10 in Australia, the Thai driver only making his one mandatory pit-stop on the penultimate lap.

He was mixing it with the likes of Alfa Romeo and Haas to achieve that result, both teams who were rivals of Williams at the back in 2021 but in the opening rounds had comfortably moved clear of Williams towards the front of the midfield.

Albon said there is a hint of frustration there, explaining Williams have not lost ground on the leading pace, instead Haas and Alfa Romeo had just moved closer to it – so he was glad to resume competition with both outfits in Melbourne.

“It’s almost frustratingly close for us because it seems like Alfa and Haas have made that step up and they have joined the midfield battle,” he said.

“We are not further away from the front than in previous years, it’s just those guys have joined the pack and so it almost looks like we are struggling, but Alfa and Haas have done a great job.

“It was nice to mix it [with them] and when I was in that group of cars, I guess part of me was mostly looking in my rear-view mirrors.

“But then very quickly I was losing them, pulling away from them and I was like ‘oh, okay, here we go, we’re gapping them’. It was really good.”