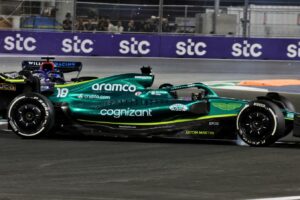 Alex Albon does not regret his failed Saudi Arabian GP move on Lance Stroll, which later earned him a grid penalty.

Albon in the Williams and Aston Martin’s Stroll went to battle in the closing stages of the race in Jeddah, Albon fancying the chance to take a point away from the race.

That plan went horribly wrong though as Albon dived down the inside, colliding with Stroll and bringing the race to a premature end for both of them.

The stewards looked into the incident and decided that Albon was to blame, handing him a three-place grid penalty for the upcoming Australian Grand Prix, as well as placing two penalty points on his superlicence.

Speaking to reporters before his punishments were announced, Albon explained that to his mind, the collision with Stroll was a racing incident.

A tough weekend comes to a close for the team 🏁

“Went for the move, honestly we’re struggling for grip, we’re not great on the brakes, but I went for it, we were fighting for some points at the end, at least hoping we would get some points today.

“So I don’t really regret the move, it was just, for me a bit of a racing incident.”

Albon’s team-mate Nicholas Latifi had crashed out of the race earlier, following on from his qualifying crash.

Put to Albon that Latifi had claimed the FW44 is difficult to drive, Albon said that it is indeed “tricky”, but explained that when in its window it is a good car to drive and has pace.

“It is tricky, when it’s in its window it’s fine, it’s actually a good car to drive, we’ve had moments of that throughout so far driving the car, even at the end of the race we were pretty quick actually,” said Albon.

“So it’s just trying to get it more consistent, unpredictable really.”

Stroll said he felt he had left enough room for Albon to make the pass.

“He dived and I felt like I left room, but I got a thump from behind,” said the Canadian.