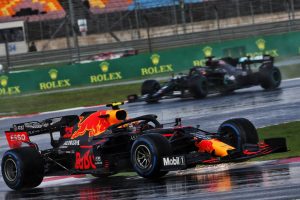 Alex Albon finished an ultimately disappointing seventh in the Turkish Grand Prix and admitted afterwards: “It was looking like a win.”

The Red Bull driver was among several competitors who had a realistic chance of claiming victory in the first half of the race at Istanbul Park, although eventually Lewis Hamilton made a one-stop strategy work to triumph in an eventful contest on a drying circuit.

The London-born Thai was probably even favourite briefly when he was running third, closing on Racing Point duo Lance Stroll and Sergio Perez, after his team-mate Max Verstappen had spun when trying to overtake the Mexican.

However, things took a downturn after the pit-stops for Albon, who later had a spin of his own and ended up in P7 – one place behind Verstappen.

Albon later described the race as “confusing” and did not know whether to be satisfied or disappointed with his weekend, especially given he is battling to save his Red Bull seat come the end of the season and that Red Bull had looked to have the fastest cars in Turkey.

“Honestly, it’s a really confusing race,” said Albon. “I would say the weekend has gone really well, I’m happy with the progress. I feel like we’ve done a few things on my side of the garage which have definitely helped. Obviously to be so competitive on Friday and Saturday and then finish sixth and seventh, it’s a bit of a tough one to take.

“Even the race itself is confusing because on the intermediate tyres it was looking like a win, to be honest – the pace was really strong. Nobody was really tyre-saving, that’s just the grip you have and you drive to your grip.

“I had my little spin and that was that, but I felt there was so much left in the race that we could still do something. But I just struggled for pace as soon as we put the second set on, [even though] it was the same tyre, similar weather. It just shows you how sensitive the tyres are and the track is.”

“It was completely zero grip. Obviously the Ferraris came alive. It’s quite a confusing one, especially when you’re in the cockpit,” he added.

“It’s an anomaly to come to a track like this. We’ll have a look at it, but I’m sure we’ll put it behind us and focus on the next one.”