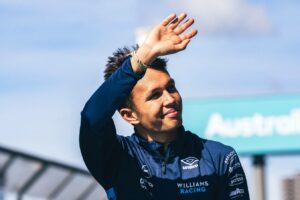 Alex Albon said that his familiarity with the Barcelona circuit will make up for him missing FP1 after Nyck de Vries’ drive was confirmed.

Williams announced on Monday that Albon would be having Friday morning off with de Vries coming in to replace him in line with a new F1 directive.

From this season, teams must now run a driver with no more than two grands prix of experience during FP1 at two rounds during the campaign.

Williams are the first team to do so and the Dutch driver will be making his first appearance on track during a Formula 1 weekend.

Albon though is not overly worried about the loss of track time given Barcelona is a circuit that all drivers are familiar with owing to its position as one of the test venues before the season.

The 26-year-old said the return to Barcelona was a good way to see how much the car has improved since pre-season.

“It will good to head back to Barcelona,” Albon said. “I’m interested to see how much the car has improved since we were last there for pre-season testing.

“It’s a good track, and one that every driver has done countless laps around, more so than any other circuit. That familiarity will work in my favour this weekend and help me get up to speed more quickly after sitting out FP1 whilst Nyck is in the car. We’re hungry for more points after Miami, so that’s what we’ll continue to push for.”

Albon’s team-mate Nicholas Latifi has also said the Barcelona drive is a good benchmark as to how far the team has progressed following the opening five races.

“After a few street-style tracks, it’s going to be nice to get back to the more traditional Circuit de Barcelona-Catalunya,” the Canadian said.

“It’s a track that should give us a good measure of where we are with the FW44 and how we’ve developed it since testing at the beginning of the season.

“I think we all feel that we’ve gained a much better understanding of the car and evolved it well, so it will be positive to have that reference point of how far we’ve come. Hopefully, we can deliver a good result in Spain.”

Latifi is one of two regular drivers yet to score a point this season alongside Haas’ Mick Schumacher. In Miami, he achieved his highest finish of the season so far in P14.