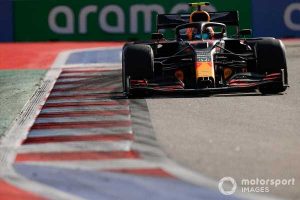 Alexander Albon’s Russian Grand Prix struggles were made worse by the Sochi circuit layout exaggerating the difficulties he has with the Red Bull car, says team boss Christian Horner.

The Thai driver has suffered from the inconsistent balance of the RB16 this year, with teammate Max Verstappen better able to deal with the tricky handling characteristics.

While it was hoped a confidence-boosting podium finish for Albon at the Tuscan Grand Prix was a sign that he had got on top of things, he endured a challenging time in Russia.

He was baffled as to why he ended up 1.1 seconds slower than Verstappen in qualifying. His race was compromised by a gearbox penalty dropping him down the grid and a decision to gamble on an early stop under the safety car.

Although he managed to recover to finish 10th, with Verstappen finishing second it was another weekend where Albon could have done better.

However, Horner reckons that the nature of the Sochi track – with slower speed corners and heavy braking zones – were never going to suit Albon.

“Alex is particularly sensitive to some of the characteristics of the car,” said Horner. “He’s struggling with that and they’re accentuated at this type of circuit with short corners and big braking zones.

“Obviously there is plenty to look at for him. His second half of the race, he recovered reasonably well, but obviously it’s been a tough weekend for him.

“So it was a shame, after the podium two weeks ago, that this one has probably been one of the hardest of the year for him.”

Albon is more comfortable with the car on higher speed corners, and the team has been working hard to try to better adapt the car setup to his liking.

Horner reckoned that good progress was being made in trying to lift Albon’s form, with him confident the RB16 will be better soon.

“I think we’ve understood some of the issues that we’ve got with the car,” added Horner. “Obviously we are working hard to address those. And I think hopefully in the remaining races, we should be able to, I hope, take steps that will improve the car in that area.”