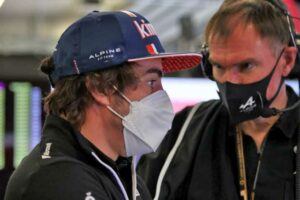 Alpine sporting director Alan Permane believes Fernando Alonso is still racing at the “very highest” level, just as he was when he won his two World titles.

Alonso returned to Formula 1 last season, putting his Alpine on the podium at the Qatar Grand Prix and promising that was just the beginning.

But so far this season’s results haven’t quite gone his way with Spaniard scoring in Bahrain, retiring in Saudi Arabia and being undone by various issues in Australia.

The latter was a case of what could have been as Alonso felt had his A522 not suffered a hydraulic issue that led to him crashing out of qualifying, he could have challenged Charles Leclerc for pole position.

Instead he lined up P10 on the grid and was working his way up the order when the timing of the Safety Car ruined his race strategy.

His efforts to recover from that were hurt by badly graining tyres.

Permane, though, reckons his driver still has what it takes to fight with the very best at the sharp end of the grid.

“The very highest level,” Permane responded on the F1 Nation podcast when asked about where Alonso’s speed ranks at the moment.

“[There’s] no doubt in my mind. People asked me this all last year, and he doesn’t seem any different to when he drove 15 years ago for us.”

Permane knows from yesteryear how difficult it is to beat Alonso even in the same machinery.

He was working on Giancarlo Fisichella’s side of the garage when the team were team-mates at Renault back in the mid-2000s.

While the Italian managed just one victory in 2005 and another in 2006, Alonso won seven both seasons and back-to-back Drivers’ Championship titles.

“Actually, I was engineering the other car [Fisichella],” Permane said. “Fernando was a little bit the enemy and we could never, no matter how good a weekend we had, we could never get in front of him – so I know how good he is.

“And then I worked with him when I was chief engineer, and I’ve known him a long time. He’s the real deal, that’s for sure.”

The sporting director could be working with Alonso for several more years.

Alonso has made it known that he is ready to commit to Alpine beyond this season, saying he is “enjoying” every aspect of life back in Formula 1.

He told DAZN: “I still have a lot to offer.

“Right now, I am enjoying Formula 1 a lot. I enjoy racing, I am enjoying all the things because Formula 1 is not only the activity on the track, you have a lot of activities off the track and I also enjoy them.

“So I think at least two or three years I hope you see me around here.”