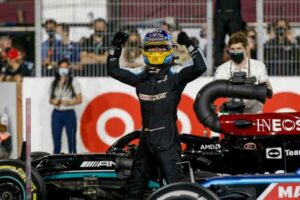 Back on the podium for the first time in seven years, Alain Prost says Fernando Alonso is the “best driver” on the Formula 1 grid.

Under the lights at the Losail circuit on Sunday evening, Alonso was promoted to third on the grid due to penalties for Max Verstappen and Valtteri Bottas.

The Spaniard joked prior to the start that he hoped to be leading by Turn 1, and while that was not the case, he was soon up to P2 after picking off the AlphaTauri of Pierre Gasly.

He dropped back down to third as championship leader Verstappen came storming through.

Challenged by Sergio Perez for third place, the Mexican driver on much fresher tyres in the closing stages as his second set of Pirellis saw him lapping a second quicker than Alonso who was on a one-stop strategy, Alonso held onto finish on the podium.

“I’m enjoying, f*** I was waiting so long for this, so I’m happy,” he said in the post-race interview.

This is what it means!
Team work, El Plan, everything! Olé olé olé @alo_oficial! #QatarGP pic.twitter.com/sqwkFf6RKJ

Alonso’s P3 meant he secured his first podium for Alpine and his first in Formula 1 since the 2014 Hungarian Grand Prix, 105 races ago – a record interval between consecutive podiums.

He was joined on the podium by title rivals Hamilton and Verstappen, but according to Prost it was the 40-year-old who shone brightest of all.

Prost told Auto Motor und Sport in Qatar: “For me, he is the best driver in the field.

“The overview of the race he has is unbelievable, as is his feel for the tyres, the statements he makes about the car and how he feeds the engineers.”

Alonso though reckons he was in exalted company on Sunday.

“With all due respect, I am sharing the podium with Lewis Hamilton and Verstappen, not anyone else,” he told the Spanish broadcaster DAZN.

The double World Champion has made it clear in the past that his comeback is focused on 2022 with this year’s championship being used as a building block for a 2022 title challenge.

Four-time World Champion Prost says he has been impressed with the Alpine driver’s attitude.

“Fernando has always told me that he has become a different person, and I have to say that he was right,” he added.

“He is totally at the service of the team, and that is very good for the team.”

Alpine pulled ahead of AlphaTauri in the battle for P5 in the Constructors’ Championship in Qatar, the team now 25 points ahead.