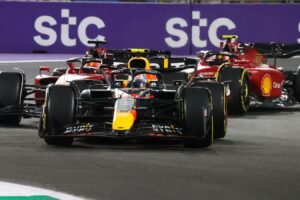 Red Bull’s design chief Adrian Newey says it is “lucky” for Formula 1 that his team and Ferrari started the season so evenly matched.

When Formula 1 introduces a new set of regulations, especially such extreme changes as was the case for 2022, it does create the risk that the grid will become more spread out.

However, that has not turned out to be the case. The midfield pack remains very competitive, Alpine, Haas and Alfa Romeo seemingly at the head of it, while Mercedes early on find themselves in their own bubble ahead of the midfield, but trailing the leading pace.

Crucially though, it is not a one-team domination at the front. Across the opening two rounds in Bahrain and Saudi Arabia, there was very little separating Red Bull and Ferrari.

Charles Leclerc took Ferrari back to the top step of the podium in Bahrain, while at the Saudi Arabian Grand Prix, it was Verstappen who claimed the victory.

So, Formula 1 should consider itself lucky to have this kind of battle at the front, according to Newey.

Speaking on the F1 Nation podcast, he said: “I think at the moment, the lucky thing for F1 is that we have got two teams, Ferrari and ourselves, who over the first couple of races have had very similar performance.

“That is what is giving the good racing, obviously.”

Leclerc and Verstappen put on a show with their on-track battles during the opening two races, Leclerc holding off the Dutchman in Bahrain, before Verstappen emerged victorious in a late Jeddah scrap to secure victory there.

It was the aim of these new rules to ensure that the drivers could follow closer for longer without losing as much performance, and Newey does believe that the cars have gone in the right direction in this regard.

However, he did point out that Verstappen complained of being unable to get within two seconds of Leclerc during his first stint in Jeddah.

“In terms of the closeness of the racing, generally the drivers do think it is a bit easier to follow,” said Newey.

“Although Max was saying, as you probably heard on the radio, that he was finding he could get to about two seconds on the first stint and then couldn’t get any closer.

“I think everything has gone in the right direction. The cars being so heavy makes them perhaps a little bit more difficult at times but it has been a brilliant couple of races.”