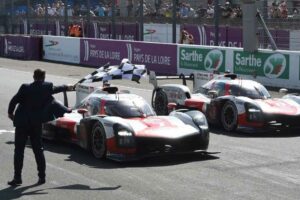 It sort of reminded us of spring – the 89thrunning of the 24 Hours of Le Mans came in like a lion, under cloudy, rainy skies, and went out like a lamb, all warm and sunny and virtually crisis-free. For the most part the right teams won, and for the rest, there’s always 2022, which will be run under similar rules before the Great Makeover of 2023 rolls around with the new LMDh cars. Meanwhile:

1: A huge victory for the Hypercar and drivers Mike Conway, Kamui Kobayashi and Jose Maria Lopez. It should come as no surprise to anyone that the two Toyotas, Nos. 7 and 8, took first and second coverall, but the Alpine Malmut, the plucky little team that could, finished third nipping at the heels of the Toyotas and made it a Hypercar podium sweep. But just as impressive was the fact that the Glickenhaus 007s were a close fourth and fifth, meaning the lone five Hypercars took first through fifth with no major failures. Impressive.

2: And about time for the starstruck No. 7, with Koybayashi, Conway and Lopez, driving a near-perfect race in a car that appeared to be ready to run another 371 laps (It was 387 last year, but there were fewer yellow-flag laps.) It was the fourth straight win for Toyota, but the first for No. 7. Both Toyotas suffered from minor fuel deliver issues that probably did not look minor when they were happening. The second-place car was driven by Sebastien Buemi, Brendon Hartley and Kazuki Nakajima.

3: The race’s biggest drama took place in the final few minutes when the No. 41 LMP2 car of Team WRT led by driver Robert Kubica simply stopped on track during a final run to the checkered flag. Team WRT won anyway since the No. 31 car of Robin Frijns, Ferdinand Habsburg and Charles Milesi was running in second, and went on to win. They held off a charge from No. 28 JOTA Sport Oreca of Tom Blomqvist by just 0.727 seconds at the line.

4: The LMP2 Pro-Am class win was by the No. 21 DragonSpeed Oreca of Ben Hanley, Juan Pablo Montoya and Henrik Hedman.

5: Ferrari and AF Corse went on to sweep both GT classes, with the car of James Calado, Alessandro Pier Guidi and Come Ledogar winning the GTE-Pro class, and No. 83 Nick Nielsen, Francois Perrodo and Alessio Rovera took the win in GTE-Am for AF Corse. It led by almost two minutes over the No. 33 TF Sport Aston Martin Vantage GTE of Felipe Fraga, Dylan Pereira and American driver Ben Keating.

6: In GTE-Pro, the No. 63 Corvette C8.R of Jordan Taylor, Antonio Garcia and Nicky Catsburg tool second place. Team car No. 64 was sixth after contact with the class-winning Ferrari on the formation lap, with more problems as the race wore on for Tommy Milner, Nick Tandy and Alexander Sims.

7: The WeatherTech Porsche of IMSA regular Cooper MacNeil was retired after a hard crash just before midway in the race. The Hub Auto privateer Porsche, that was the surprise polesitter, also faded early in the competition.

In all, after the hectic opening, the 24 Hours, moved from June to August to allow fans to attend, settled into a comparatively calm pace that saw the Toyotas dominate, but they had to work for it based on the performance of the other three Hypercars. Congratulations to No. 7 team for finally shoving the monkey off their backs.