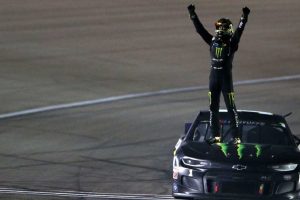 Kurt Busch is a NASCAR Cup Series champion and a Daytona 500 winner.

And yet, Sunday’s victory in the South Point 400 was as significant as any other achievement in his Hall of Fame career.

The 41-year-old entered the second round of the playoffs as a long shot to advance and was the bottom seeded contender at the start of the Round of 12. It was also his first win of the season and broke a 21-race winless streak at his home track dating back to 2001.

“This is 20 years of agony, defeat and now today, triumph,” Busch said. “I don’t know if I have any more gas left or if I just filled my tank up to go win every race that I’m in next.

“This feeling of growing up here and watching the track get built. When Speedway Motorsports bought the track and realizing it was going to get a Cup date. I wanted to work my way up to win here. So then coming up through Legend cars every Saturday night. My parents giving me and my little brother every opportunity.

“This was just a hobby. I never thought we’d get this far. Craig Keough of Star Nursery here in Las Vegas took a chance on me and let me drive his Late Model. We won and it takes a village to get someone to this level and I have so many people to thank.”

That was said every bit as emotional as it reads, tears swelling in the 2004 champion’s eyes and soaking his mask.

“It’s right there underneath Daytona, underneath the championship back in 2004,” Busch said. “Any time you win, it’s special. But to do it in front of my hometown crowd and nobody was there and all the people that I see every time I come to Vegas and I get to say thank you and I can’t right now, that’s the hardest part.

“So, this one is easily ramping up to being my third most favorite win ever.”

Busch was rightfully reminiscent on the past, but the win is important for his future as well as it means he no longer has to worry about what transpires over the next two weeks at Talladega Superspeedway and the Charlotte Motor Speedway Roval.

The Chip Ganassi Racing No. 1 team is already in the Round of 8.

Now, he and crew chief Matt McCall can focus on Kansas, Texas and Martinsville and doing whatever it takes to advance to the Championship Race at Phoenix Raceway on Nov. 7.

“I’ll be honest with you, we needed everything to go perfect in this round to advance to the Round of 8,” Busch said. “You never want to count yourself out as a championship contender, but we knew we needed to work a little harder to keep pace with (Denny Hamlin), to keep pace with (Kevin Harvick). There’s the Penske guys that are strong, and I saw (Harvick) tonight struggling, and (Kyle Busch) was running around me a lot tonight.”

They still need to work on getting that speed to compete for a championship, but they caught a lucky break with a caution right in the middle of final green flag stops.

That cycled Busch to the lead and he never relinquished it.

“You never know when your moment is going to come and the yellow came out at a perfect opportunity for us, and so yes, we’re advanced through to the Round of 8,” Busch said. “I still think it’s important to grab points at Talladega and the Roval. We just don’t have any ill side effects that are going to pop up these next two weeks. So, we still need to go out there and put points in our pocket.”

How everything transpired at Las Vegas can be found below.

The caution waved on Lap 237 — just after the leaders had pitted but right before Busch and nine other drivers came down pit road.

Denny Hamlin had led 121 laps with stage finishes of first and second but was trapped one lap down. He took a waive around to get back on the free pass but couldn’t take tires until another caution waved for a multi-car incident on Lap 251.

From that point, Hamlin had just 12 laps to march his way through the top-15 on fresher right sides, albeit with a rules package that makes passing a tremendous challenge.

And yet, Hamlin got to sixth before another caution waved for yet another multi-car crash with six laps to go, setting up NASCAR overtime.

Hamlin could only get to third, finishing behind Busch and Matt DiBenedetto.

He saw it coming, too.

“I mean, I called it before it even happened, that we’re going into the last stage and (Chris Gabehart, crew chief) mentioned to me on the radio that the strategy would be similar to what it would be in Stage 2, and I just knew that we’d been caught — I don’t know how many times this year by people that just stay out because they’re having a sub-par day.

“They’re doing the best strategy for them, but it traps the guys that are up front all day.”

In this case, Kurt Busch hadn’t run inside the top-15 all afternoon, and his only chance to have a productive day was choosing not to pit until he absolutely needed to.

That paid off when Jimmie Johnson cut a right rear when Busch was the highest running driver of those who had yet to pit.

Once he was able to restart up front, Busch just needed to execute his restarts, and clean air took care of the rest thanks to the high downforce, low horsepower rules package.

And then there was Hamlin, a victim of circumstance, just bit by the timing of the caution.

He was forced to pit when he did because Alex Bowman behind him short pitted. Hamlin pitted, but that one lap on fresh tires had Bowman in position to be the free pass recipient when Johnson suffered his puncture.

“We just got caught again,” Hamlin said. “Told him that we were going to get caught if we came early, but our hand got forced by the 88, by them coming in early there.

“We both had a lead over most of the field, so I would have thought we would have ran a little bit longer, but we had to answer their strategy because they were within one second of us. We didn’t want to just kind of give them the lead and then count on running them down at the end of the race.

You have to keep yourself in front of them and essentially, we were going to stay out as long as (Bowman) was. They forced our hand there. They didn’t make us pit, we decided to pit, but it’s a lap too late again.”

Early in the second stage, on Lap 88 of the race, Kyle Busch darted under Joey Logano for the lead but was joined by Denny Hamlin in a three-wide scenario.

THREE-WIDE FOR THE LEAD!

The pass resulted in contact between Busch and Logano. Hamlin went on to lead the most laps, Logano was forced to pit for a tire rub, and Busch was left reeling and looking for adjustments to regain his lost speed.

Busch gained eight stage points and ultimately finished sixth, but it wasn’t the total race he was looking for.

“I haven’t been able to see it or look at it or anything like that, so I don’t know what all went down there,” Busch said. “I know Denny made a last-minute move in order to make us three-wide, and I don’t know if (Logano) knew that was coming and didn’t adjust for it and didn’t plan for it. It kind of seemed like he expected me to go to the bottom (lane) and run the bottom, and he was going to run my door.”

For his part, Logano says he was surprised by Hamlin’s move that early in the race. The 2018 Cup Series champion wasn’t able to return to the lead lap until 17 laps to go. He finished 14th.

“We salvaged something out of it,” Logano said. “We definitely left at least 10 points or so and that is probably a conservative number of points left on the table that would be very nice to have. That is in the past now. Now we move forward and head to Talladega and cross our fingers and see what happens there.”

Logano enters the middle race of the second round 11 points above the cutline. Busch is nine points below it.

After a Cinderella start to his Cup Series playoff run, Austin Dillon suddenly and immediately finds himself facing two must-win scenarios over the next two weeks at Talladega and the Charlotte Motor Speedway Roval.

Or at least, he thinks so.

With 50 to go, Dillon lost his power steering and started pushing water with his pressure gauge pegged at 400 degrees. The Richard Childress Racing No. 3 lost nine laps undergoing repairs and finished 32nd.

The third-generation racer fell to 12th in the standings and 32 points below the cutline.

“I’m not sure what caused it,” Dillon said. “It’s just unfortunate. What happens, happens. It just wasn’t our night. We were doing what we needed to do. We earned stage points — sixth and seventh.

“We had the pit road penalty, but we would have been in a good spot because we were behind (Kurt Busch) …

“Parts failures suck, but we have to go to Talladega and win.”

Dillon entered the first round on the cutline bubble but earned the fourth most points of any driver during those three races with finishes of second, fourth and 12th.

“With this system, you have to perform throughout,” Dillon said. “But we’ve showed up in the playoffs. We gotta make it happen at Talladega.”

Disaster for #NASCARPlayoffs driver @austindillon3 in the #SouthPoint400 as he heads to pit road! pic.twitter.com/QWM341O85p

5. KURT’S WIN IS A PLAYOFF UPSET

Even with the win, Kurt Busch is currently just ninth in the championship standings, not that it matters since his win at Las Vegas permits him entry into the Round of 8 regardless of what happens at Talladega and Charlotte.

But it goes to show you just how complicated it makes it for everyone else to advance into the penultimate round.

Busch now holds one of the eight spots for the next round, leaving seven others to either win their way in or advance on points.

Now factor in that those races take place at the ultra-combustible Talladega and Charlotte Roval, where any current challenger could conceivably win either race or be eliminated early in a multi-car incident.

Busch was an underdog to advance into the Round of 8, but due to his good fortune, he became the first one to lock himself in.